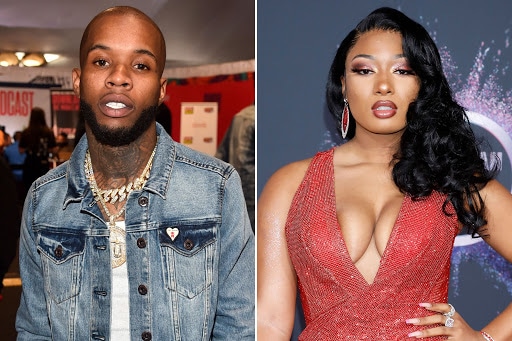 An altercation between  Tory Lanez and Megan Thee Stallion in July ended up with the rapper behind bars after police arrested him for finding a gun in his car, and Megan in the hospital after reports said Lanez allegedly shot her.

According to reports, previously on Saturday night (July 11), Megan was at a poolside with Lanez and Kylie Jenner on her Instagram Live pic.twitter.com/soLnIBsFxE. Police later arrested Lanez  on Sunday, July 12 when officers found the weapon in his SUV after receiving a disturbance call outside a Hollywood Hills residence around 4:00 a.m.

According to TMZ‘s early report an argument ensued and someone fired shots in the air before taking off in the vehicle, where police later found the “Hot Girl” rapper and another woman. They reported Megan had a cut on her foot from the broken glass of the car, but she said on Wednesday, July 15 that she was suffering “multiple gunshot wounds, as a result of a crime that was committed against me and done with the intention to physically harm me.” The 25-year-old artist explained she was not arrested at the time but was driven to the hospital to undergo surgery to remove the bullets from her foot.

Following Megan’s Instagram post, her friend Kelsey Nicole, who was the other woman found in the car, came forward on her own social media to also set the record straight. “I want to clear up the the rumors that I shot Megan. I WASN’T the one with the gun and would never do something like that . However I was present,” she wrote in a since-deleted Instagram post.

Additionally, the Suga rapper’s producer Lil Ju Made The Beat posted a series of tweets about the incident, one of which directly targeted Lanez in a since-deleted post, “@torylanez count your f—ing days,” he wrote. The hitmaker later told his followers not to believe that The New Toronto 3 rapper “was defending her,” after a fan wrote a since-deleted account of her representatives saying Lanez was protecting the “Girls in the Hood” artist.

I hope y’all don’t believe he was defending her! This a bullshit story https://t.co/441zNsGq8I

And snitching is talking to the police.

Page Six reported on Thursday, July 16 that Lanez allegedly shot her from inside the SUV “while Megan was outside trying to leave.” The source also claimed police were investigating the video footage. “This is a case of a man physically harming and abusing a woman,” read the report.

According to Page Six, on Thursday, July 16 that Lanez allegedly shot her from inside the SUV “while Megan was outside trying to leave.” The source also claimed police were investigating the video footage.

Lanez was released the morning of July 16 after posting a $35,000 bail and is scheduled to appear in court on Oct. 13.

On Friday, July 17, Megan said on social media after memes about her shooting circulated the internet. “Black women are so unprotected & we hold so many things in to protect the feelings of others w/o considering our own,” she tweeted. “It might be funny to y’all on the internet and just another messy topic for you to talk about but this is my real life and I’m real life hurt and traumatized.”

Then on July 22, media personality Draya Michele compared the situation between the two rappers to Bobby Brown and Whitney Houston’s tumultuous relationship during an episode of the Wine & Weed Podcast. “I predict that they had some sort of Bobby and Whitney love that drove them down this type of road,”. Says Michele  “I’m here for it. I like that. I want you to like me so much you shoot me in the foot too.”

just want to take a min to address victims of domestic violence and abuse of any kind and just overall humans, I was wrong to insinuate that there is room for violence in loving relationships, or in any relationship for that matter,” she wrote. “I was wrong to try to find humor or make light of the situation, and understand that my joking nature was damaging and hurtful. It was poor judgment and I deeply regret it. This is a sincere apology from me to everyone.”

Less than a week later Megan tearfully addressed the issue on her Instagram Live on July 27 about her surgery addressing the gunshot wounds in her feet.

“I was shot in both of my feet, and I had to get surgery to get the sh– taken out, get the bullets taken out, and it was super scary,” she said. Fortunately, she reported the bullets in both feet didn’t hit her bones nor break any tendons. During her recovery process, the rapper said she planned on protecting her energy.

“I just wanted y’all to know a bi— is alive and well and strong as f—. And I’m ready to get back to regular programming with my own hot girl sh–,” she said about going back to music,” but I’ve definitely learned that I don’t have to be so nice to every motherf—ing body. This ain’t gon’ stop me from being nice, it ain’t gon’ stop me from being Megan The Stallion driving the boat, doing the f— what I wanna do, having this good a– energy.”

After this, 50 Cent made the rare move of apologizing for making fun of the rapper by posting memes about the shooting allegedly involving Lanez. “Da– I didn’t think this sh– was real,It sounded so crazy @theestallion i’m glad your feeling better and I hope you can accept my apology,” he tweeted. “I posted a meme that was floating around. I wouldn’t have done that if i knew you was really hurt sorry.”

Thankfully Megan could count on “Savage” remix partner Beyoncé, Rihanna and Lizzo who  sent her to send her gifts and well-wishes while she was healing. During this process, she also celebrating her new No. 1 “WAP” collaboration with Cardi B, which came at the top  the Hot 100 in the week ending Aug. 22.

In a since-deleted Instagram post from Aug. 19, Megan had shared images of criss-cross stitches in her heel and the doctors inspecting them as proof she got shot alongside a statement detailing how she’s been recovering.

She wrote as part of the caption: “I got my stitches out my feet like 2 weeks ago and I was ready to go celebrate WAP going number1… I usually don’t address internet bullsh– but y’all people are so sick! God was really watching over me and I’m healing so well! Sorry I’m not as sad and miserable as a lot of y’all lol but ima keep being Megan Thee Mf STALLION.”

Billboard on Thursday, Aug. 20 says they were able to confirm that the Los Angeles District Attorney’s office was considering whether to file charges against Lanez for the alleged shooting.

Later on Thursday, for the first time, Megan confirmed Tory Lanez as the one who shot her. “Yes … Tory shot me. You shot me and you got your publicist and your people going to these blogs lying,” she said in an Instagram Live video. “Stop lying. Why lie? I don’t understand.”

On Friday, Sept. 25, imagine the surprise when Tory dropped the surprise 17-track album Daystar, where he kinda addresses the incident in one of the tracks.

“Gotta see a couple questions: how the f–k you get shot in your foot, don’t hit no bones or tendons?,” he raps on the song, whose intro features a collage of news clips about the incident. “Megan people tryna frame me for a shootin’…Knowin’ I ain’t do it but I’m comin’ at my truest.”