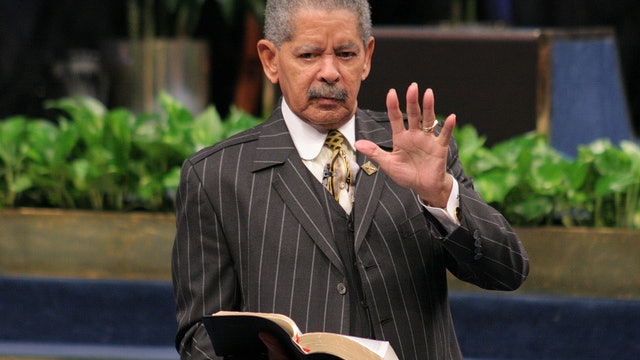 “Our Husband, Father and your Apostle has gone to be with the Lord this (Friday) evening,” the post read. “We accept his decision to go as he got a glimpse of glory a couple of weeks ago.

“But we are sad. Please allow us some time to process all of this. He fought the good fight of faith and laid hold of eternal life.”

Price and his wife of 67 years, Dr. Betty Price, founded the Crenshaw Christian Center in 1973, first located at 9550 Crenshaw Boulevard in Inglewood before moving in 1981 to the former Pepperdine University campus on South Vermont Avenue at 79th Street.

In 1986, construction began on the 10,000-seat FaithDome. That same year, the Prices and Angela Evans founded FKCP III Christian Schools. The elementary school opened in 1986, a middle school in 1987 and high school in 1992, according to the Price school’s website.

Price’s “Ever Increasing Faith” broadcast debuted on Fox11 in 1978 and is now seen around the world.

The Santa Monica native is also the author of more than 50 books on faith, healing and prosperity, and was an early adopter of using social media as part of his ministry.

“I remember this general as a kid being (one) of the few persons of color I saw preaching with a national TV-level ministry,” Pastor Charles Montgomery of Columbus, Ohio tweeted. “A pioneer. RIP Frederick K.C. Price.”

Many also remembered Price’s influence on other religious leaders.

“For those of you who do not know this … Apostle Frederick K. C. Price and his teachings were a great influence on this ministry,” KW Ministries of Christiansburg, Va. tweeted. “He was a wonderful Man of God. Rest now, for you have fought the good fight, have finished your race, and have kept the faith. Amen.”

ABC7 reported the cause of death as COVID-19. In January, his family announced that both Price and his wife tested positive for coronavirus. She had only mild symptoms, but Price spent weeks in the hospital.

Why the freak cold weather and power outage in Texas, US?

The Affliction of Northern Nigerian Christians

Every Human Being Deserves to Breathe!, States Pastor John Gray