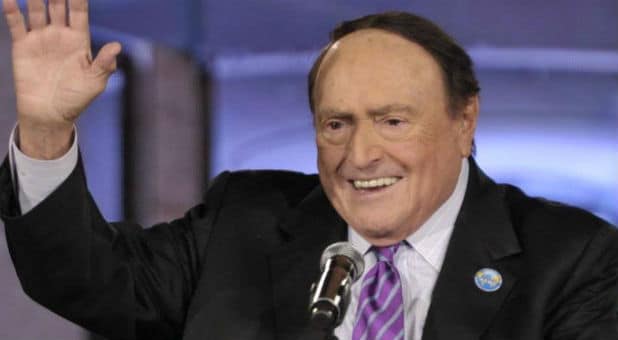 Evangelist Morris Cerullo passed away on July 10 at the age of 88.

His family had posted an urgent prayer request on Facebook, saying he was in the hospital.

“Dear Friends, we would appreciate your immediate prayers for Dr. Cerullo who is being treated for Pneumonia at the hospital. Please also pray for Theresa who has been working around the clock to assist in his care. She needs your prayers too for extra strength at this time. Thank you for all your thoughts and prayers for Morris and Theresa!”

Cerullo came to Jesus at the age of 14 and started preaching when he was 15-years-old.

Dr. Cerullo formed Morris Cerullo World Evangelism (M.C.W.E.) in 1961. In 2011, he launched the daily television show, “Victory Today” and he has written more than 200 Christian books.

Over the decades, Dr. Cerullo has ministered to presidents and prime ministers.

Cerullo shared the gospel of Jesus Christ in multiple countries across the world including Nigeria, Mexico, Brazil, The Philippines, Korea, Zimbabwe, South Africa, Kenya, Indonesia, and the Netherlands.

The evangelist received numerous awards and recognitions for being a crusader for Christ. In 2015, he received the prestigious Lifetime Global Impact Award in May 2015.

He is survived by his wife of 68 years, Theresa, his children, David Cerullo and Susan Peterson, 7 grandchildren, and 9 great-grandchildren.