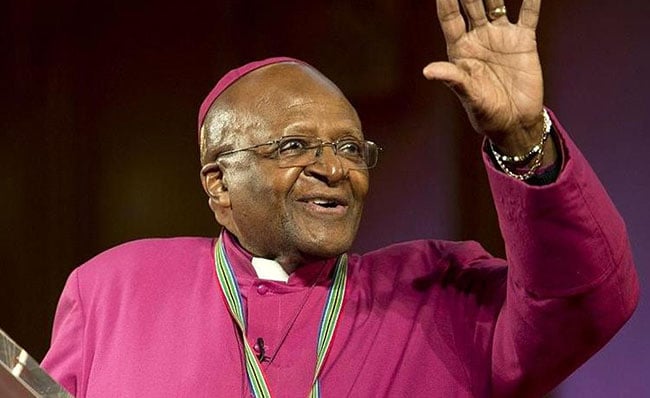 Desmond Tutu, died Sunday in Cape Town after a long battle with prostate cancer and infections.

The 90-year old was considered ‘a thorn in the side of the apartheid government’.

Tutu was known as a churchman who criticized minority white rule in South Africa as he also did the post-apartheid African National Congress (ANC) rulers for failing to deliver for poor Black people.

His rebukes often went beyond South Africa, as his sayings mostly came with humour and warmth.

He touched on Israeli treatment of Palestinians, the United States-led war in Iraq and hardliners within his own church. The pursuit of peace took him to Cyprus, Northern Ireland and Kenya.

The Archbishop was born in 1931 in a Transvaal gold-mining town, Klerksdorp, to Zachariah, a teacher, and Aletta, a domestic servant. He initially followed his father’s footsteps into teaching but resigned to protest against government restrictions on schooling for Black children.

He was influenced by Bishop Trevor Huddleston and other anti-apartheid white clergymen, becoming a priest in 1961 and the first Black Anglican dean of Johannesburg in 1975.

Tutu and others took over the campaign for change when Mandela was in jail. As police brutally oppressed Black student protests in Soweto in 1976, Tutu argued that a white-minority government was racist, doomed and defied God’s will.

His “clear views and fearless stance”, which made him a “unifying symbol for all African freedom fighters”, won him the Nobel Peace Prize in 1984, according to the Norwegian Nobel Institute.

Though short in stature, Tutu was a giant of South African politics, notable for his drive, infectious laughter and witty critiques of apartheid’s absurdities. In one example, he told followers: “Be nice to whites, they need you to rediscover their humanity.”

He was elected archbishop of Cape Town in 1986 and continued tackling minority white rule, welcoming President FW de Klerk’s liberalisation efforts upon taking office in 1989, such as the release of Mandela and the lifting of an anti-ANC ban.

In February 1990, Tutu led Mandela, a longtime friend, on to a balcony at Cape Town’s City Hall overlooking a square where the ANC leader made his first public address after 27 years of political imprisonment.

In November 1995, he was asked by then-president Mandela  to chair the country’s Truth and Reconciliation Commission (TRC) and gather evidence on apartheid-era crimes and recommend whether those who confessed their sins should receive amnesty.

At the end of the inquiry, he accused many of South Africa’s former white leaders of lying to the commission. According to Tutu, however, the goal was “restorative” rather than “retributive” justice and aimed at “communal harmony” under the Southern African principle of Ubuntu.

As such, Tutu was criticised for being too soft on Black activists who had fought apartheid with violence, such as Winnie Mandela, and for not doing enough to punish whites who had governed the Black majority so harshly for decades.

Under democratic rule, he criticised South Africa’s ANC leaders in Pretoria for riding a “gravy train” of privilege while others languished in poverty.

He called Zimbabwe’s President Robert Mugabe a “cartoon figure” who had turned his country into a “basket case” and criticised South Africa for being too soft on him. In 2011, he again censured his country for pandering to China by failing to issue a visa to the Dalai Lama.

Tutu increasingly shifted to global issues. He was central to efforts to calm the political violence that engulfed Kenya after the disputed 2007 election, brokering a power-sharing deal between rival leaders Mwai Kibaki and Raila Odinga.

In 2007, he joined a newly formed group of mature statesmen, called The Elders, with former US President Jimmy Carter, Kofi Annan, Mary Robinson and others. That same year, he led the group on its first mission to Darfur in Sudan.

The next year, he travelled to the divided Mediterranean island of Cyprus, where Turkish Cypriot and Greek Cypriot leaders had launched reunification talks. There, he encouraged people from both camps to back the mediation process.

He ruffled Israeli feathers by comparing the treatment of Palestinians with apartheid South Africa. He asked former US President George W Bush and former British Prime Minister Tony Blair to admit they had erred with their “immoral” war in Iraq.

According to Clive Conway, chairman of the Tutu Foundation UK, the Ubuntu principles underpinning Tutu’s philosophy proved their value when they were applied to “struggling communities everywhere”.

“Arch was brave, incorruptible and authoritative. We all learned from his trademark style of peaceful mediation that worked not just against apartheid but in Gaza, Sierra Leone and beyond,” Conway told Al Jazeera.

“For us, getting gang members and police officers from London or the leaders of the Protestant paramilitary groups in Belfast together at the same table to understand their inter-dependence as fellow human beings made a difference in their lives.”

Tutu was diagnosed with prostate cancer in the late 1990s and in recent years he was hospitalised on several occasions to treat infections associated with his cancer treatment.

He had celebrated his 90th birthday on October 7 this year with a rare public appearance, attending a special Thanksgiving service at St George’s Cathedral in Cape Town.

South African President Cyril Ramaphosa said Tutu’s death on Sunday “is another chapter of bereavement in our nation’s farewell to a generation of outstanding South Africans who have bequeathed us a liberated South Africa”.