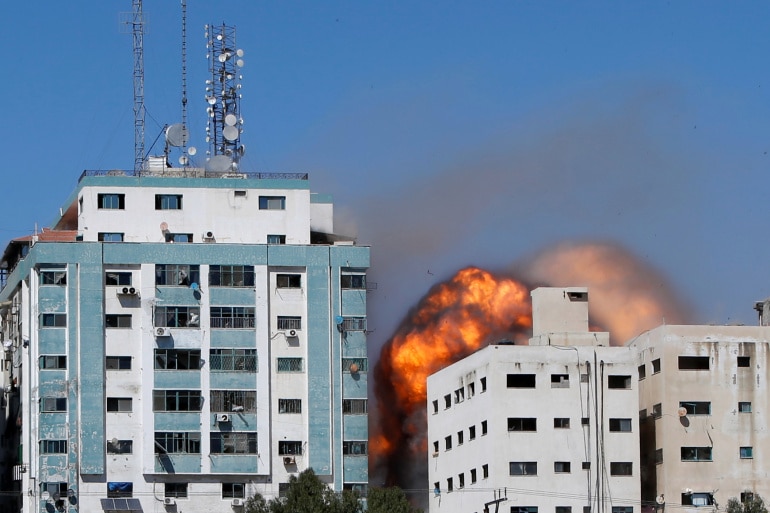 A 12 story building containing the offices of the Associated Press and Al Jazeera in Gaza has been destroyed by an Israeli air strike.

The Israeli army told the owner of the Al-Jalaa tower about the strike an hour before the bombing. AP staff and others in the building evacuated immediately.

Video footage shows the 12-story building collapse, with smoke billowing from it and debris flying into the air. A Palestinian journalist was wounded in the strike, Palestinian media reported, and debris and shrapnel flew dozens of yards away.

The Israeli military said its “fighter jets struck a multi-story building which contained military assets belonging to the intelligence offices of the Hamas terror organization”.

Al-Jazeera, the news network funded by Qatar’s government, broadcast the airstrikes live as the building collapsed.

Hamas responds by firing dozens of rockets at cities in Israel, killing one man near Tel Aviv

US envoy Hady Amr has arrived in Tel Aviv for de-escalation talks with Israeli, Palestinian and UN officials

Hamas militants have fired more than 2,000 rockets at Israel during the latest violence. Palestinians medics say at least 139 people, including 39 children, have been killed in Gaza. Israel has reported nine dead, including two children.