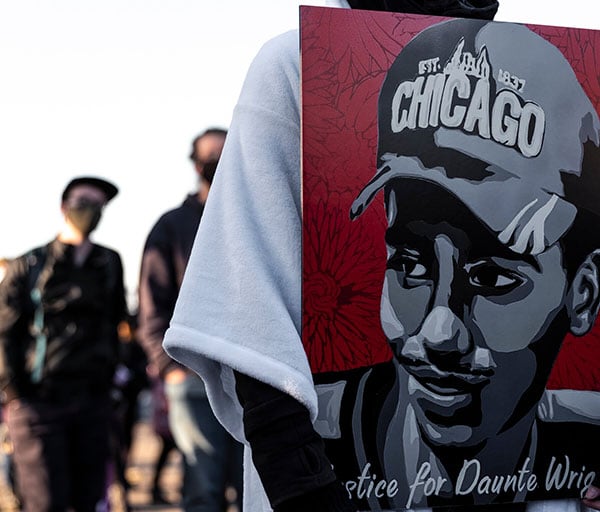 Potter says she mistook her gun for her Taser when she gravely shot Daunte Wright during a traffic stop near Minneapolis. She wept on the stand Friday saying she is sorry and “didn’t want to hurt anybody.”

“I was very distraught. I just shot somebody. I’m sorry it happened,” she said as a prosecutor asked her about her behavior moments after the fatal shooting. “I’m so sorry.”

Kimberly Potter who fatally shot Black motorist Daunte Wright earlier this year, near Minneapolis, Minnesota, said she saw a look of fear on another officer’s face before she fired.

“I remember yelling, ‘Taser, Taser, Taser’, and nothing happened, and then he told me I shot him,” Potter said through tears on the stand at her trial on Friday.

She has said she meant to use her Taser instead of her gun to stop Wright from driving off as officers tried to arrest him during a traffic stop on a warrant for a weapons possession charge.

The killing brought renewed attention to police violence against Black people in the US, leading to protests and more calls for reforms.

The stop and death happened just a few miles north of where Derek Chauvin stood trial for the killing of George Floyd, whose 2020 death during an arrest set off racial justice protests across the country. Chauvin was convicted of murder.

Potter’s lawyers have argued that she made a mistake but also would have been within her rights to use deadly force if she had meant to because another officer was at risk of being dragged by Wright’s car.

Asked whether she knew deadly force was “unreasonable and unwarranted,” Potter cried: “I didn’t want to hurt anybody.”

The defense rested Friday afternoon and jury instructions and closing arguments are scheduled to begin Monday. Potter was the last of more than 30 witnesses called over eight days.

“It’s nothing I’ve seen before,” she said, “We are struggling. We’re trying to keep him from driving away. It just went chaotic. I remember yelling — ‘Taser, Taser, Taser’ — and nothing happened. And then he told me I shot him,” she said, crying and placing her hands over her face.

The former officer testified she probably would not have stopped Wright’s car had she been by herself. But another officer pointed out the driver had used a turn signal incorrectly; the tags were expired and an air freshener hung from the rearview mirror.

Potter resigned from the force days after the killing.

Her defense explained the killing as an accident, arguing also that she was within her rights to use deadly force to protect another officer who was reaching into Wright’s car when Potter shot.

Prosecutors countered  that claim with expert testimony as they argued Potter was negligent and acted recklessly in mistaking her gun for her Taser.

“The use of deadly force was not appropriate, and the evidence suggests that a reasonable officer in Officer Potter’s position could not have believed it was proportional to the threat at the time,” University of South Carolina School of Law associate professor Seth Stoughton testified Wednesday for the state, calling Potter’s actions “excessive and inappropriate.”

A Taser would have been effective in incapacitating Wright, the first defense witness testified Thursday. Still, deadly force is warranted if an officer is partly inside a vehicle as a suspect is attempting to drive away, said Stephen Ijames, a law enforcement expert and former assistant police chief from Missouri.