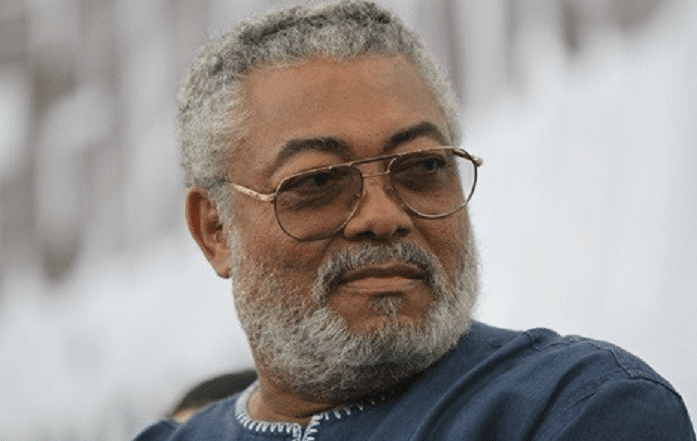 The charismatic Ghanaian military leader and elected president who was a critical part of Ghana politics in the 1980s and 90s.

In May 1979, Flt Lt Rawlings of the Ghanaian air force came into Ghana’s political scene, when with a handful of officers, he launched an unsuccessful coup d’etat against a corrupt and discredited military government headed by Gen Fred Akuffo, shortly before a planned election.

Rawlings was part of a radical underground organisation in the military called the Free Africa Movement; a group of young men who dreamed of a united African continent free of a generation of discredited corrupt leaders close to the European colonial governments and western business interests that dominated so much of the postcolonial landscape.

After the coup failed, Rawlings was arrested and condemned to death in a military trial. But his blunt statements on the country’s urgent need for a new era of social, political and economic justice had fired up his peers, and on 4 June 1979 a group of soldiers forcibly released him from prison before he could be executed.

Within weeks his Armed Forces Revolutionary Council declared a war on corruption, especially among the powerful military, and carried out the public execution by firing squad of three former military heads of state, including Akuffo, and four other senior generals. Then after 112 days elections went ahead and a civilian government, headed by Hilla Limann, a respected judge, ended the long run of military rule.

Again, after just two years, Rawlings led the removal of Limann and his People’s National party in a New Year’s Eve coup. Now Chairman Rawlings of his Provisional National Defence Council, he declared this was “not a coup, but a revolution”, and promised to “transform the social and economic order” of the country, speaking of “holy war” and of giving power to the people.

Born in Accra, Jerry was the son of Victoria Agbotui, an Ewe from Keta, and James John, an expat chemist from Castle Douglas, Kirkcudbrightshire. John refused to recognise his son – possibly a factor in many of Jerry’s character traits.

He was educated at St Joseph’s Catholic primary school then Achimota college in Accra. In 1967 he joined the military academy at Teshie, before moving on to the air force the following year. There, he became the best cadet at flying jets and excelled at aerobatics. He graduated in 1969 and was made a flight lieutenant in 1978.

By 1980, with 10 years of military life behind him, Rawlings had become a charismatic and fearless speaker who was wildly popular among the young soldiers and a militant, impoverished urban working class. At that moment of dramatic and growing economic crisis, and glaring inequality across the continent, he seized the imagination of many well beyond west Africa. He soon had an enthusiastic following in several African countries, both personally as well as for the new PNDC regime’s promises of bold economic and social reform, and of an anti-imperialist foreign policy reminiscent of that of Ghana’s first president after independence, Kwame Nkrumah (1960-66).

Cuba’s leadership seized the moment to rekindle the old relationship from the Nkrumah era and offered support, especially in health and education, opening a school in Cuba for Ghanaian children on the Island of Youth, alongside the schools for children from the liberation movements of Angola, Mozambique, Namibia and Ethiopia. This catapulted the young flight lieutenant in his military overalls into a political axis during a polarised moment of cold war face-offs with Ronald Reagan, who became president of the US the month of Rawlings’ PNDC coup.

Ghana’s government was close to Angola’s, then under clandestine military assault from Washington allied with apartheid South Africa. Rawlings was also deeply involved with another charismatic military figure, who took power in a coup in 1983 to launch a revolution – Thomas Sankara of Burkina Faso.

Ghana’s old-guard political establishment and the middle class bitterly opposed Rawlings’ alliances, plans and rhetoric, and sought his overthrow. Three major plots against his regime were uncovered in the first two years, with the US, UK and Dutch governments implicated. In the mid 80s an embarrassing scandal erupted for the US when a CIA employee in Ghana, Sharon Scranage, gave the names of a number of Ghanaians working for the CIA to a Ghanaian intelligence officer. They were stripped of their citizenship and deported to the US for resettlement.

However, he was supported in the tumultuous early years by many intellectuals and academics, putting forward an ambitious economic recovery programme for the country seeking a fairer deal from multinational companies and institutions; transforming the media; and seeding people’s and workers’ defence committees through urban areas in a huge effort of education and mobilisation to consolidate long-term political change. Rawlings, who had a brilliant, populist touch, appeared, too, in remote rural areas, promising change.

But little of that early exuberance lasted, and before long Rawlings’ Ghana had opted life-changing deal with the IMF – the IMF gives Ghana an international financial imprimatur, reschedules the debt and reopens the credit lines in return for the surrender of economic sovereignty. – this had a huge impact on Ghana’s economy.

Talk of revolution ended and some of Rawlings’ key early allies found themselves in jail; others left the country. Repression magnified the disillusion.

By 1992 Rawlings was ready to resign from the military and take up civilian politics at the head of a new party, the National Democratic Congress. He sought personal acceptance in political circles, but never really gained it. However, under a new constitution, multiparty, multi-ethnic politics flourished, Rawlings as the incumbent won two terms in office, and the NDC oversaw an average growth rate of 4.7% a year up to the end of his era in 2001. He unlike similar leaders made no attempt to change the constitution and prolong his term.

Under Rawlings’ leadership Ghana moved decisively towards becoming the middle-income country it is today, moving away from the image of corrupt and incompetent military governments before him. But also not yet young Rawlings’ dreams of a more equal society and an African independence that Nkrumah dreamed of and which saw him ousted from power by the British and the Americans and into death in exile.

After stepping down with a peaceful change of government, Rawlings was given a succession of international roles by a fellow Ghanaian, the then UN secretary general, Kofi Annan. He led a campaign against malaria in Africa, and was African Union envoy to Somalia. Rawlings was probably most at ease however with his involvement with the Thomas Sankara Foundation, which he headed, in memory of the ideals of his friend, assassinated in 1987.

He is survived by his wife, Nana Konadu Agyeman, whom he married in 1977, three daughters, Zanetor, Yaa Asantewaa and Amina, and a son, Kimathi.