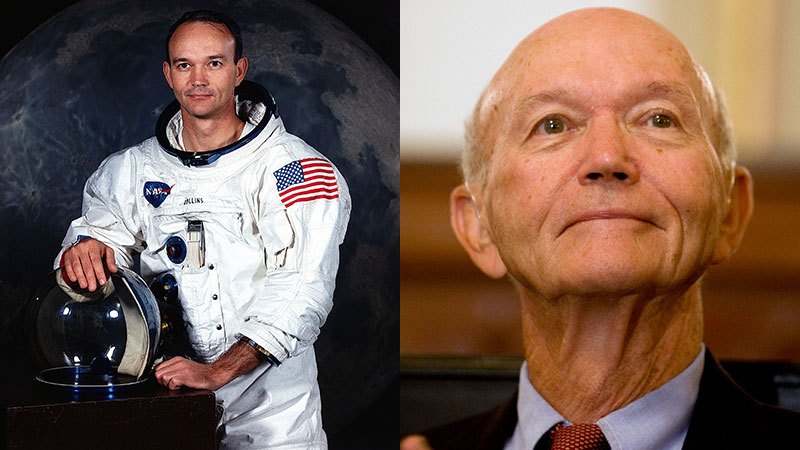 Michael Collins, the NASA astronaut who orbited  the surface of the moon while Neil Armstrong and Edwin “Buzz” Aldrin explored the ground of the moon, has died at age 90 after battling cancer.

His family shared the news Wednesday after his passing on Collins’ Facebook page.

“We regret to share that our beloved father and grandfather passed away today, after a valiant battle with cancer,” the statement read.

“He spent his final days peacefully, with his family by his side. Mike always faced the challenges of life with grace and humility, and faced this, his final challenge, in the same way. We will miss him terribly. Yet we also know how lucky Mike felt to have lived the life he did. We will honor his wish for us to celebrate, not mourn, that life. Please join us in fondly and joyfully remembering his sharp wit, his quiet sense of purpose, and his wise perspective, gained both from looking back at Earth from the vantage of space and gazing across calm waters from the deck of his fishing boat. Our family asks for privacy during this difficult time. Details on services will be forthcoming.”

NASA, where Collins spent seven years of his career as an astronaut, also released a statement about Collins’ passing.

“Today the nation lost a true pioneer and lifelong advocate for exploration in astronaut Michael Collins,” said acting NASA Administrator Steve Jurczyk in a statement. “As pilot of the Apollo 11 command module — some called him ‘the loneliest man in history’ — while his colleagues walked on the Moon for the first time, he helped our nation achieve a defining milestone. He also distinguished himself in the Gemini Program and as an Air Force pilot.

“Dear Mike, Wherever you have been or will be, you will always have the Fire to Carry us deftly to new heights and to the future. We will miss you. May you Rest In Peace. #Apollo11,” Aldrin wrote on Facebook.

Collins was often called “the loneliest man” once he returned to Earth, but he didn’t feel that way — even when he lost contact with Mission Control during his flybys on the far side of the moon. While Armstrong and Aldrin were busy landing, setting up experiments and collecting samples from the lunar surface, Collins had to keep all of the subsystems running on Columbia by himself.

“It was a happy home. I liked Columbia,” he said. “It reminded me, in a way, of almost like a church or a cathedral. It had the apse, the three couches, and then you went down into where the altar was. That was the guidance and navigation system. And it was laid out almost like a cathedral. And I had hot coffee. I had music I could play if I wanted to. I had people to talk to on the radio, sometimes too many people talking too much on the radio. So I enjoyed that interlude. Being by myself in a machine up in the air somewhere was not unknown to me, and so everything was working well within Columbia, and I enjoyed it.”

Seeing the moon up close was spectacular, but he recalls that the view of Earth kept snaring the astronauts’ attention.

“I said ‘Hey, Houston, I’ve got the world in my window,’ ” Collins said. “And the world is about the size of your thumbnail if you hold it out arm’s length in front of you. The whole focus of your attention goes into this little thing out there. It’s in a black void, which makes its colors even more impressive. Primarily, you get the blue of the oceans, the white of the clouds, you get a little streak of tan that we call continents, but they’re not that noticeable. It just looks glorious.”

But Collins noticed something unique about his perspective of our home planet.

“Strangely enough, it looks fragile somehow,” he said. “You want to take care of it. You want to nurture it. You want to be good to it. All the beauty, it was wonderful, it was tiny, it’s our home, everything I knew, but fragile, strange.”