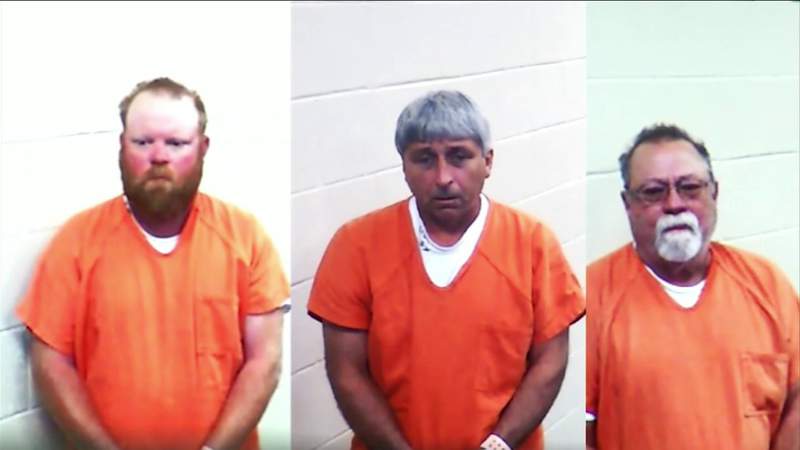 Three men have been charged by a federal grand jury of hate crimes and attempted kidnap in the fatal shooting of Ahmaud Arbery.

Ahmaud Arbery, a black man, was jogging in February 2020 when he was confronted by the three white men.

His killing and the subsequent police handling of the case sparked protests.

In a statement, the US Attorney’s office in the Southern District of Georgia said the three men were charged with allegedly interfering with Mr Arbery’s right to use a public street because of his race.

They are also accused of attempting “to unlawfully seize and confine Arbery by chasing after him in their trucks in an attempt to restrain him”.

Gregory McMichael, 65, and his son Travis, 35, are each further charged with a count of using, carrying and brandishing a firearm. Travis is also charged with discharging the firearm.

The three men have already pleaded not guilty to charges, issued by a grand jury in Georgia last June, of malice murder, felony murder, aggravated assault, false imprisonment, and a criminal attempt to commit a felony.

They face trial later in the year.

Arbery, 25, was killed on Feb. 23, 2020, by three close-range shotgun blasts after the McMichaels pursued him in a pickup truck as he was running through their neighborhood. Arbery had been dead for more than two months when a cellphone video of the shooting was leaked online and a national outcry erupted.

The Georgia Bureau of Investigation took over the case the next day and swiftly arrested Travis McMichael, who fired the shots, his father, and Bryan, a neighbor who joined the pursuit and took the video. The three men remain jailed on state murder charges and are due back in court in May.

S. Lee Merritt, an attorney for Arbery’s mother, Wanda Cooper-Jones, applauded the hate crimes charges Wednesday, tweeting that the federal case would “serve as a fail-safe to the state prosecution.”

The McMichaels’ lawyers have said they pursued Arbery, suspecting he was a burglar, after security cameras had previously recorded him entering a home under construction. They say Travis McMichael shot Arbery while fearing for his life as they grappled over a shotgun.

Local prosecutors have said Arbery stole nothing and was merely out jogging when the McMichaels and Bryan chased him.

The Justice Department alleges that the men “used force and threats of force to intimidate and interfere with Arbery’s right to use a public street because of his race.”

In pretrial court hearings in Georgia, prosecutors have presented evidence that racism may have played a role in the man’s death.

Last June, an agent with the Georgia Bureau of Investigation testified Bryan told investigators that Travis McMichael uttered a racist slur right after the shooting as he stood over Arbery, who was bleeding on the ground.

“Mr. Bryan said that after the shooting took place before police arrival, while Mr. Arbery was on the ground, that he heard Travis McMichael make the statement, ‘f—-ing n—-er,’” GBI agent Richard Dial testified.

Travis McMichael’s attorneys have denied that he made the remark.