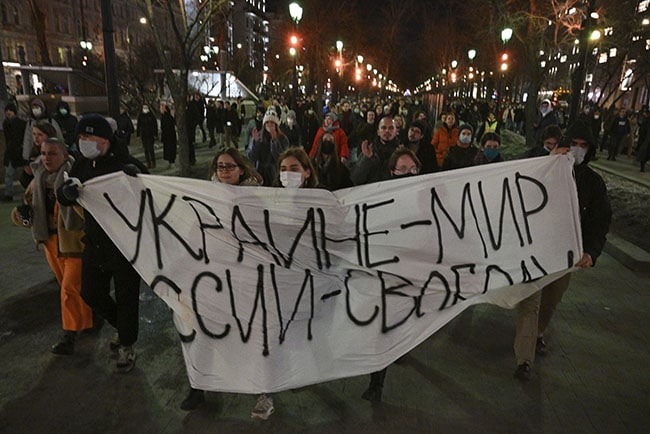 Hundreds of people have been detained across 49 cities in Russia at protests against President Vladimir Putin’s invasion of Ukraine, according to OVD-Info. Cities include the Pacific port city of Vladivostok and the Siberian city of Irkutsk.

The OVD-Info protest monitoring group said on Sunday the arrests were in cities including the Pacific port city of Vladivostok and the Siberian city of Irkutsk. Opposition activists posted videos showing protests in other cities.

Protesters chanted “No to war!” and “Shame on you!”, according to videos posted on social media by opposition activists and bloggers.

On Saturday, the Russian interior ministry had warned that any attempt to hold unauthorized protests would be prevented and the organizers would be held to account.

There was at least 2,502 arrests on Sunday bringing the total number of people held in anti-war protests since the invasion began on February 24 to more than 10,000, OVD-Info said.

Jailed Kremlin critic Alexey Navalny had called for protests on Sunday across Russia and the rest of the world against the invasion.

“Because of Putin, Russia now means war for many people,” Navalny said on Friday. “That is not right: It was Putin and not Russia that attacked Ukraine.”

Putin ordered what he calls a “special military operation” to defend Russian-speaking communities against persecution in Ukraine and to prevent the west from using Ukraine to threaten Russia.

The West has called his arguments a baseless pretext for war and imposed sanctions that aim to cripple the Russian economy. The US, United Kingdom and some other NATO members have supplied arms to Ukraine.

Putin’s approval ratings have jumped in Russia since the invasion, according to Moscow-based pollsters.

A number of international broadcasters, including the BBC, CNN, Italy’s RAI and Germany’s ARD and ZDF, have said they will stop reporting from Russia after its parliament passed a draft law punishing the publication of what it calls “fake news” about its invasion with jail terms of up to 15 years.

Award-winning independent Russian newspaper Novaya Gazeta says it will also stop reporting on the war in Ukraine in light of the new law., while several other Russian news outlets have suspended operations.