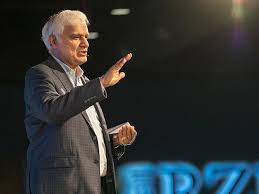 Christians all over the world mourn as Ravi Zacharias, 74, passed away at his home in Atlanta on May 19 from a rare form of cancer in his spine.

He announced earlier this year that he was suffering from extreme pain in his spine and would undergo surgery. A malignant tumor of the sacrum called sarcoma was discovered in March. but his daughter announced less than two weeks ago that no further medical treatments were available.

Zacharias was born Frederick Antony Ravi Kumar Zacharias in Chennai, India in 1946. He gave his life to Jesus at 17 while recovering in a Delphi hospital after attempting to take his own life.

In an interview with CBN News he explained, “I was on a bed of suicide in Delhi, searching for meaning, searching for the answers to life’s basic questions. They boil down to this – origin, meaning, morality, and destiny. How did I come into being? What brings life meaning? How do I know right from wrong? Where am I headed after I die?”

“It was his Savior, Jesus Christ, that my dad always wanted most to talk about,” Sarah Davis, his daughter said. “Even in his final days, until he lacked the energy and breath to speak, he turned every conversation to Jesus and what the Lord had done. He perpetually marveled that God took a 17-year-old skeptic, defeated in hopelessness and unbelief, and called him into a life of glorious hope and belief in the truth of Scripture – a message he would carry across the globe for 48 years.”