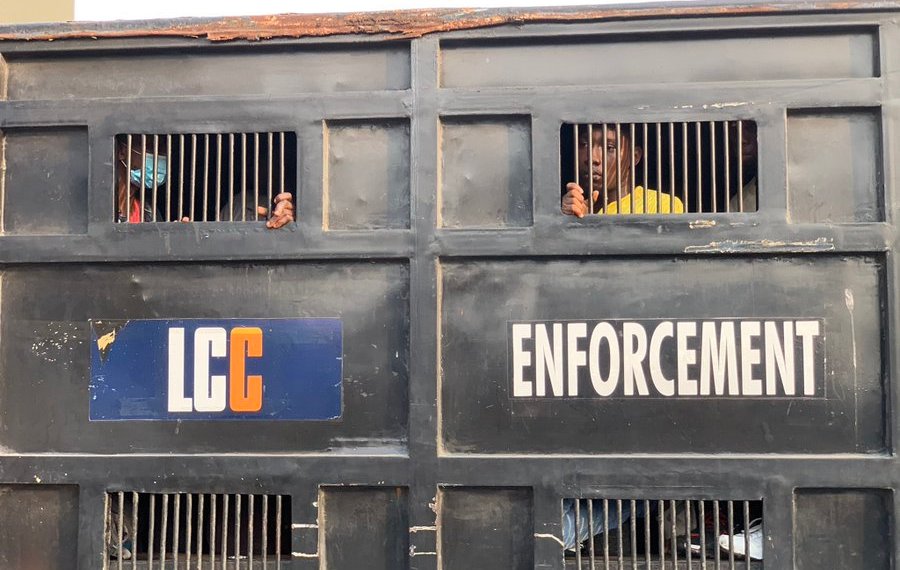 At least 28 people including Nigerian comedian Mr Macaroni were arrested at Lekki toll gate today Saturday the 13th of February. Some of those arrested say they were just walking by.

Despite the heavy presence of police, activists called for protests after reopening of Lekki toll gate where security forces shot at demonstrators in October.

At least six of the protesters were beaten with truncheons and arrested before being driven away in police vans.

Demonstrators are also exasperated by the failure of a commission of inquiry to submit its report into the killings.

This quickly developed into the #occupyLekkitollgate movement, with the youth rising to resist the reopening.

In response to #occupyLekkitollgate, some other youth vowed to #DefendLagos, in opposition of the planned protest

The arrests began around 7:47 a.m. when some police officers drove towards Lekki Phase 1 and brought back with them a few protesters approached the toll gate on foot, dragging them into the Black Maria belonging to the LCC.

About 13 protesters were arrested and driven to an unknown location in the first set of arrests.

A vehicle conveying a speaker, sound system, generator and some protest material was also impounded.

The Lekki toll plaza, which has not been operational since the commencement of #EndSARS protest, was completely shut down on night of October 20, 2020, following the shooting of unarmed protesters by officers of the Nigerian army.

This gave birth to a protest and counter-protest scheduled to hold at Lekki toll gate at 7 a.m. on Saturday.

Rights group Amnesty International and witnesses said soldiers opened fire on protesters on October 20, killing at least 12 people at a toll gate in the city’s affluent Lekki district and another area.

The military has denied shooting live rounds and police have denied involvement.

“Lekki toll gate should be made a museum of resistance and not a monument for money-making,” said Damilare Adebola, 24, who spoke from the police van where he was being held.

On Friday, one of the two youth members of a Lagos state panel investigating the October shootings, Rinu Oduala resigned, citing “undue intimidation of peaceful protesters” and the panel’s vote to reopen the toll gate – a source of revenue for the state government – before the probe had been finished.

The mostly youth-led protests against police brutality and governance brought Africa’s largest city to a standstill in October in a campaign that won backing from many high-profile celebrities.

The #EndSARS protests, named after the SARS police force accused of abuses, spread even after the unit was disbanded and the government promised reforms.