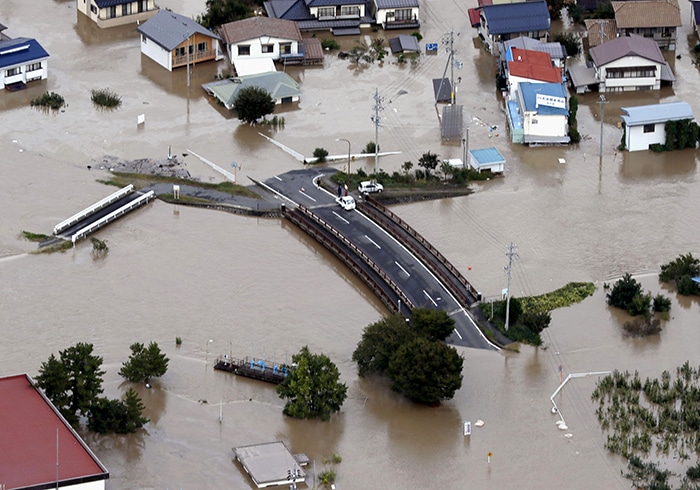 The super typhoon made landfall in southern Japan as a strong Category 2 hurricane, but has weakened somewhat, but still bringing heavy rainfall and gusty winds.

The storm has killed at least two people since it hit Kagoshima, Japan’s Kagoshima. One man was found dead in a car on a flooded-out farm, while another man died when his cottage was hit by a landslide.

At least one person is missing, and dozens of other storm-related injuries have been reported, according to Reuters.

Nanmadol landfall record of a central pressure of 935 millibars, makes it the fourth-strongest typhoon on record to make landfall in Japan, with historical records dating back to 1951. It hit land with winds around 110 miles per hour.

In advance of the storm, more than 8 million people in southern and western Japan were asked to evacuate their homes. Experts warned that the storm could end up being one of the most destructive typhoons in decades to strike Japan.

According to Japanese broadcaster NHK, about 1,000 millimeters of rainfall — more than 39 inches — have fallen since Thursday in Misato Town, Miyazaki prefecture, which is more than twice the town’s average in the month of September.

The widespread heavy rainfall spilled into rivers and roadways, spawning landslides and making for dangerous travel.

As a result of the storm, hundreds of flights were canceled and bullet train services suspended in affected parts of the country, according to the Japan Times.

In Tokyo, the worst of the storm is expected to arrive Tuesday. Rainfall rates of roughly 2 inches an hour are possible, with up to about 6 inches of rain forecast by the time the storm exits the region.

The Japanese Meteorological Agency’s latest forecast shows the storm swirling just off Tottori prefecture in the Sea of Japan. Nanmadol’s sustained winds have fallen to 63 mph. The storm is not expected to strengthen again before making another landfall as an even weaker storm in mainland Japan — though heavy rainfall is still expected.

After making its final landfall in Niigata prefecture, the storm is forecast to exit the Japanese mainland and cross into the Pacific Ocean late Tuesday morning.

Nanmadol is the 14th typhoon of the season in the Pacific. Japan is in the midst of its typhoon season, which routinely brings more than a dozen storms a year to the country. Storms can form at all times of the year, but storm formation peaks from July to October.