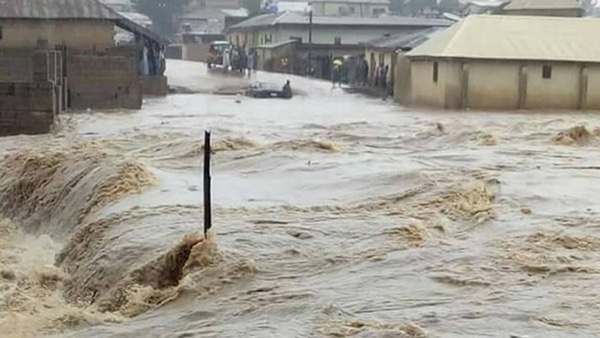 Nigeria experiences annual flooding, especially the coastal areas, but this year floods are the worst in more than a decade. The government authorities blames the disaster on the release of excess water from Lagdo Dam in nearby Cameroon and on unusually heavy rainfalls.

More than 600 people have died, some 1.3 million people across 33 of  36 states have been displaced, and more than 200,000 homes have been destroyed as at Sunday. Flooding is expected to continue until the end of November.

The alleged main cause is the construction of the Lagdo Dam located in Northern Cameroon started in 1977 and was completed in 1982.

Before the project began, Cameroon and Nigeria had an agreement to build two dams so that when water is released from the Cameroonian dam, the Nigerian dam would hold it and prevent it from causing floods.

The Nigerian government agreed to build said second dam named Dasin Hausa Dam in Adamawa State. The Dasin Hausa Dam was projected to be two and a half the size of the Lagdo Dam, which was built to supply electricity to the northern part of Cameroon and allow the irrigation of 15,000 hectares of crops downstream.

Like the Lagdo Dam, the dam project sited at the Dasin Village of Fufore Local Government Area of Adamawa State was supposed to generate 300 megawatts of electricity and irrigate about 150,000 hectares of land in Adamawa, Taraba, and Benue states. But Nigerian government has yet to complete the building of the Dasin Hausa dam.

This has resulted in uncontained flooding across Nigerian communities during the yearly release of excess water in Cameroon from the Lagdo Dam.

The Nigerian meteorological agency has warned that the flooding could continue until the end of November in some states in the south of the country, including Anambra, Delta, Rivers, Cross River and Bayelsa.