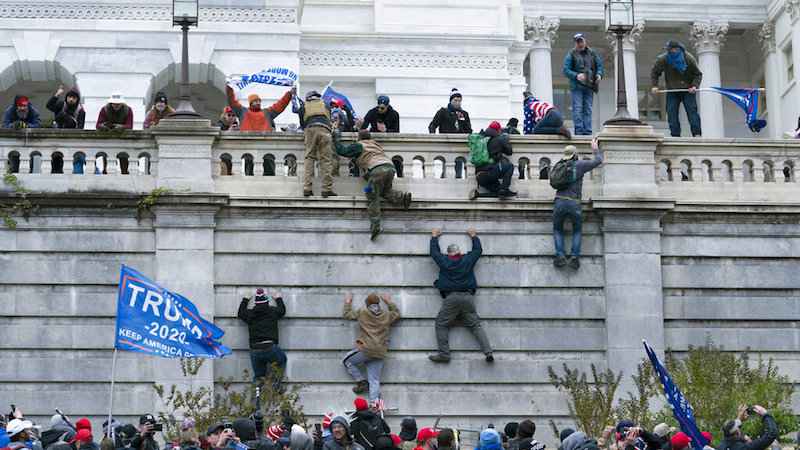 2021 has indeed begun with stuff we thought we will never see except in Hollywood movies.

Pro-Donald Trump protesters, not happy that he lost the presidential election, stormed the US Capitol on Wednesday as Congress met to tally the electoral votes that certify Joe Biden’s election as president.

As the protesters overcame the US Capitol Police outside, many others breached security and entered the Capitol building, creating a scene of chaos and causing members of Congress to flee the House and Senate chambers to be safely locked down in their offices while some were evacuated elsewhere.

At about 2pm (19:00 GMT), while senators were debating an objection to Arizona’s electoral votes raised by Republican Trump supporters, debate was halted when word came that protesters were in the hall outside the Senate chamber.

By 19:47 GMT, there were reports of guns drawn inside the House chamber.

Trump’s first tweeted was a criticism of his vice president, Mike Pence, who was presiding over the congressional vote tally, then urged his supporters to “Stay peaceful!” which of course they seemed not to attend to.

According to reports, one person was shot dead at the capitol during the protests.

Protesters broke into House Speaker Nancy Pelosi’s office. Pelosi had already been evacuated from the area and was said to be safe.

Pence later tweeted, “The violence and destruction taking place at the US Capitol Must Stop and it Must Stop Now.”

Trump’s supporters in Congress are spoke out about the violence and asked the president to get things under control.

House Minority Leader Kevin McCarthy, who backed the Republican plan to object to some states’ electoral votes during Wednesday’s tally, said in a US television interview, “What we are currently watching unfold is un-American. I am disappointed. I am sad. This is not what our country should look like.”

Florida Republican Senator Marco Rubio tweeted, “Mr. President @realDonaldTrump the men & women of law enforcement are under assault. It is crucial you help restore order by sending resources to assist the police and ask those doing this to stand down.”

As the disorder escalated, the mayor of Washington, DC, Muriel Bowser, implemented a city-wide curfew for 21:00 GMT. Bowser had pre-emptively asked for National Guard assistance earlier this week and White House Press Secretary Kayleigh McEnany tweeted that Trump ordered the National Guard to the US Capitol.

At 4pm (21:00 GMT) hour, both Biden and Trump address on the violence took different tones with Biden denouncing the protesters as “extremists” and “a mob” and Trump saying “We love you. You are very special.”