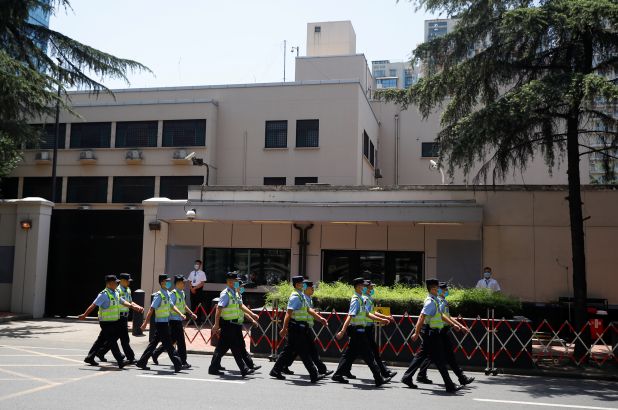 Over the weekend, China ordered the closure in response to the US closing their consulate in Houston, Texas.

On Saturday, the US insignia was taken down, while on Sunday removal work began on a plaque outside the embassy and shipping containers were loaded onto trucks, as staff prepared for the consulate to be closed.

Chengdu is the capital of China’s southwest Sichuan province, hence an important diplomatic outpost for the US, covering a large swath of the country, including the controversial Tibetan Autonomous region.

“Today, we bid farewell to the US Consulate General in Chengdu. We will miss you forever,” the mission’s official post said.

Last Tuesday, Washington told China to “cease all operations and events” at its Houston consulate, claiming that the mission had been coordinating espionage at a Texas research institution.

US officials told reporters Friday that staff at the Chinese consulate “were directly involved in communications with researchers and guided them on what information to collect.”

According to a senior State Department official, the idea to close the Houston consulate emerged this spring after China interfered when US officials returned to the consulate in Wuhan to retrieve diplomatic materials.

The Chinese Foreign Ministry called the closure of the Houston consulate an “unprecedented escalation” of ongoing tensions between the two countries.

This is a continuation of the tensions between the US and caused by the ongoing trade war, allegations over the coronavirus pandemic and US criticism of human rights abuses in both Hong Kong and Xinjiang, which Beijing denies.But a Singaporean national has admitted to spying for Beijing in the US.

“As President Trump has made very clear, we need a strategy that protects the American economy and indeed our way of life. The free world must triumph over this new tyranny,” Secretary of State Mike Pompeo said.

“The truth is that our policies — and those of other free nations — resurrected China’s failing economy, only to see Beijing bite the international hands that were feeding it. We opened our arms to Chinese citizens, only to see the Chinese Communist Party exploit our free and open society.”

British Airways To Retire All Its Boeing 747s