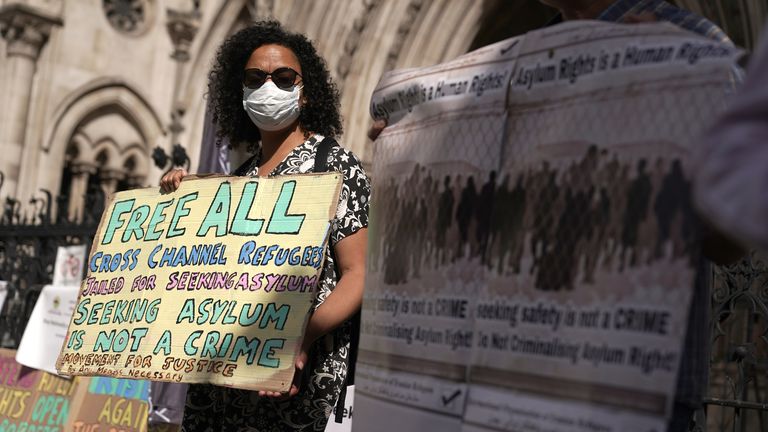 The British government’s plan to fly asylum-seekers from the UK to Rwanda is to go ahead after a court rejected a last-minute appeal.

The last-minute request to stop the deportations to Rwanda failed on Monday after the Court of Appeal in London dismissed attempts to stop the first flight.

The British government has faced criticism over the plans from the United Nations as well as human rights and refugee groups.

Protests are expected before the first departure, which is scheduled happen on Tuesday.

Judge Rabinder Singh dismissed the appeal on Monday, saying the appeals court could not interfere with a prior High Court ruling that was “clear and detailed.”

The judge also refused to grant permission for further appeal — meaning the first planned flight on Tuesday looked set to go ahead.

Refugee charities and a trade union lodged an appeal to temporarily halt the planned flights, arguing that they would undermine the “basic dignity” of people fleeing war, oppression and other circumstances.

The High Court on Friday ruled that the flights could go ahead, but that those who were slated for deportation could still appeal on Monday.

What is the plan between the UK and Rwanda?

As planned by the British and Rwandan governments, some asylum-seekers who are in the UK will be given a one-way ticket to Rwanda.

The British government plans on making additional payments to Rwanda based on the number of asylum-seekers it deports.

The first flight will reportedly have over 30 people on board — but the number is believed to have now dropped to 11.

British officials have not commented on the nationalities of those who have been slated for the first deportation flight to Rwanda, although British charities say the flight includes people fleeing from Syria and Afghanistan, Reuters news agency reported.

Why is the UK pushing for the plan?

The British government has defended the debated plan, saying it welcomes refugees who come to Britain by approved immigration routes, but it also wants to put an end to criminal smuggling and dangerous Channel crossings.

The government hopes the flights will serve to deter other asylum-seekers looking to enter the UK.

Rwanda has also defended the deal, with President Paul Kagame saying it was not about “trading people” but offering a chance for asylum-seekers to begin a new life.

The UN High Commissioner for Refugees, Filippo Grandi, sharply criticized the UK government’s plans. He said the move to fly asylum-seekers to Rwanda is “all wrong” and sets a “catastrophic” precedent.

“The UK says… we do this to save people from dangerous journeys. Let me doubt that a little bit,” he said to reporters.

“Saving people from dangerous journeys is great, is absolutely great. But is that the right way to do it?” he asked. “I don’t think so.”

The UN’s refugee agency says the British government’s plans do not take into account the limited resources in Rwanda to process asylum claims.

The move also could set a dangerous precedent for lower-income countries who are hosting far more refugees than the United Kingdom.

“What am I going to tell them if they say a rich country like the UK, they are sending them abroad, I will do the same. I close my border… and they can go to another country?” Grandi said.

“The precedent that this creates is catastrophic,” he added.