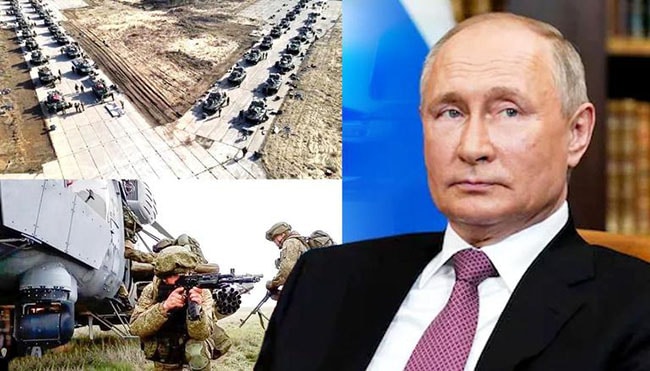 At least 100,000 troops are positioned within reach of Ukraine’s borders as Russia demands security guarantees from the West.

Russian spokespeople daily deny any intention to invade. The next move could threaten Europe’s entire security structure. So, too, did Russia’s president, Vladimir Putin, when he met the French leader, Emmanuel Macron, last week, and when he spoke to US president Joe Biden on the phone.

The two issue with this is people find it hard to believe Putin, so most western governments do not believe the denials. Secondly why, if his intentions are peaceful, is more than half of Russia’s armed forces, including 130,000 troops, are gathered on Ukraine’s borders?

Russia has long resisted Ukraine’s move towards European institutions, and NATO in particular. Its core demand is for the West to guarantee Ukraine will not join NATO, a defensive alliance of 30 countries.

Ukraine shares borders with both the EU and Russia, but as a former Soviet republic it has deep social and cultural ties with Russia, and Russian is widely spoken there.

The threat is being taken seriously because Russia has invaded Ukraine before.

When Ukrainians deposed their pro-Russian president in early 2014, Russia annexed Ukraine’s southern Crimean peninsula and backed separatists who captured large swathes of eastern Ukraine. The rebels have fought the Ukrainian military ever since in a conflict that has claimed more than 14,000 lives.

What does Putin want?

There are numerous theories. Putin is said to want to rebuild a Russian sphere of influence in eastern Europe, with former Soviet republics such as now independent Estonia, Latvia, Lithuania, Belarus, Georgia and Ukraine. Putin may also hope to demonstrate to the west (and Russians) that the country is still a superpower, even though by most measures (nuclear weapon stockpiles and geography apart) it is a failing medium-sized power.

Putin fears strategically important Ukraine, commanding Russia’s south-western flank, is assimilating into the west. He is not comfortable with its growing closeness to NATO. He also opposes Kyiv’s developing links with the EU.  Ukraine being a democracy, with free speech and free media, which freely elects its leaders makes it even worse from Putin’s view. In practice, Russians enjoy no such freedoms – if they followed Ukraine’s example, Putin would not last long. More broadly, Putin is a nostalgic revisionist who regards Ukraine as an integral part of historical Russia and its loss as a symbol of Russia’s cold war defeat. To understand President Putin’s thinking on Ukraine, last year he called Russians and Ukrainians “one nation”. He labelled Ukraine’s current leaders as running an “anti-Russian project”.

Present western weakness might be the draw for Putin. NATO was humiliated last year in Afghanistan and Joe Biden, who campaigned to end wars, not engage in new ones, has refocused American foreign policy and military resources on China, not Europe. It’s also suggested Putin needs a big victory to shore up his domestic support, vindicate his anti-western policies, excuse rampant regime corruption and kleptomania, and justify the hardships Russians endure as a result of western sanctions imposed after his first attack on Ukraine, in 2014.

What are Putin’s demands?

To end the standoff (maybe), Putin wants Nato to promise never to accept Ukraine (or Georgia and Moldova) as members. He wants the alliance to pull back from “frontline” countries such as Poland, Romania and Bulgaria, former members of the defunct Warsaw Pact. He wants Kyiv to accept autonomous status for the Donbas region and relinquish its claim to Crimea (as part of the so-called Minsk accords). He wants to limit or halt deployments in eastern and southern Europe of new US medium-range missiles. More ambitious still, he wants to redesign Europe’s “security architecture”, to re-establish Russia’s influence and extend its geopolitical reach. To most of this, the US says “no”. Hence the current crisis. Russia has also proposed a treaty with the US barring nuclear weapons from being deployed beyond their national territories.

Nato’s 30 members have turned down flat any attempt to tie their hands for the future. “We will not allow anyone to slam closed Nato’s open-door policy,” said US Deputy Secretary of State Wendy Sherman.

And non-Nato members Sweden and Finland have also rejected Russia’s attempt to stop them beefing up their ties with the alliance. “We will not let go of our room for manoeuvre,” said Finland’s prime minister.

Will the invasion happen?

Russia is continues saying it has no plans to attack Ukraine: and foreign intelligence chief Sergei Naryshkin has condemned “dangerous lies” being spread by the US and in Western capitals.

Nato’s secretary general warns the risk of conflict is very real. The US says a Russian invasion could happen any day, but does not know or believe that President Vladimir Putin has decided on it. President Joe Biden has called on US citizens to leave Ukraine. The UK, Japan, the Netherlands, Latvia and Norway have all followed suit.

In the words of UK Prime Minister Boris Johnson: “This is probably the most dangerous moment in the course of the next few days in what is the biggest security crisis that Europe has faced for decades and we’ve got to get it right.”

President Biden’s top military officer, Gen Mark Milley, has warned the scale of the Russian forces would cause a significant amount of casualties and fighting in urban areas would be horrific.

Ukraine is less convinced of the risk and its president has appealed to the West not to spread “panic”. France believes Mr Putin’s main aim is in gaining a better security deal.

What can the west do?

The US and other Nato allies have made clear they have no plans to send combat troops to Ukraine itself but are instead offering support.

The Pentagon has put 8,500 combat-ready troops on alert and is deploying 3,000 extra soldiers to Germany, Romania and Poland. Other Nato allies have beefed up their support on the alliance’s eastern flank.

The main tools in the West’s armoury appear to be sanctions and military aid in the form of advisers and weapons.

President Biden has threatened Russia’s leader with measures “like none he’s ever seen” if Ukraine is attacked. So what would they involve?

The ultimate economic hit would be to disconnect Russia’s banking system from the international Swift payment system. That has always been seen very much as a last resort, and there is concern it could badly impact the US and European economies.

Another key threat is to prevent the opening of Russia’s Nord Stream 2 gas pipeline in Germany, and approval for that is currently being decided by Germany’s energy regulator.

Covid: South Africa now has its own version of Moderna vaccine