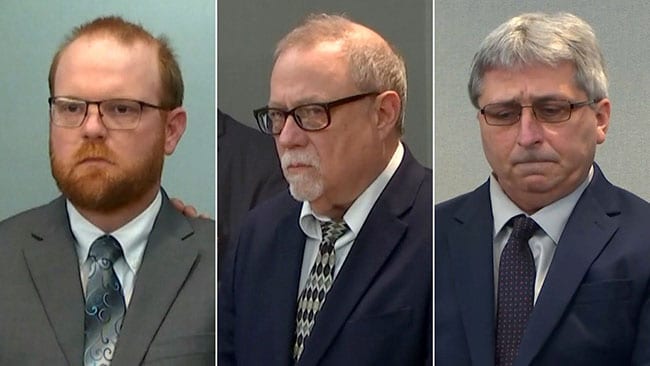 The three white men who pursued and shot at close range a  25-year-old Black jogger Ahmaud Arbery in south Georgia were sentenced to life in prison Friday, with two having no chance of parole.

Travis McMichael, 35, his father, Gregory McMichael, 66, and neighbor William “Roddie” Bryan were convicted in November on a number of charges, including felony murder, for Arbery’s death.

Before handing down the sentence, Walmsley held a minute of silence, saying it “represents a fraction of the time Ahmaud Arbery was running” through the neighborhood outside Brunswick before he was killed on February 23, 2020.

He described the killing as a “chilling, truly disturbing scene,” telling the court, “When I thought about this, I thought from a lot of different angles. And I kept coming back to the terror that must have been in the mind of the young man running through Satilla Shores.”

Arbery’s mother and father cried as the sentences were handed down, according to a pool reporter present. Gregory McMichael leaned back in his chair and appeared visibly shaken, the reporter added, after his son was sentenced.

Earlier in the day, Arbery’s mother, WandaCooper-Jones delivered a victim impact statement aimed at achieving a stiffer sentence, asking the judge to impose the maximum sentence.

“I made a promise to you the day I laid you to rest,” she said, speaking directly to her late son. “I told you I love you, and someday, somehow, I would get you justice.”

“Son, I love you as much today as I did the day you were born. Raising you was the honor of my life, and I’m very proud of you.”

The judge imposed additional prison time for each of the defendants for other felony charges. For the McMichaels, that additional time will be served concurrent to each other but consecutive to the life sentence, Walmsley ruled. As a result, both face total sentences of life without parole plus 20 years.

Sentencing, Walmsley said, “does not generally provide closure,” though that may be what Arbery’s family and the community are seeking.

“Instead of closure, maybe it would be best to see today’s proceeding as an exercise in accountability,” the judge said. “We are all accountable for our own actions. Today demonstrates that everybody is accountable to the rule of law. Taking the law into your own hands is a dangerous endeavor.”

At a news conference after the sentencing, Arbery’s mother was asked how important was it for her to respond to comments from Gregory McMichael’s defense attorney Laura Hogue, who called Arbery’s toenails long and dirty in her closing arguments.

But it seems not to be over as the defense  attorneys say they’ll appeal the verdicts; a federal hate crime trial is slated for next month; Arbery’s mother has filed a civil lawsuit; and the original prosecutor faces charges over her alleged handling of the case.

All we know about Novak Djokovic and the vaccine exemption