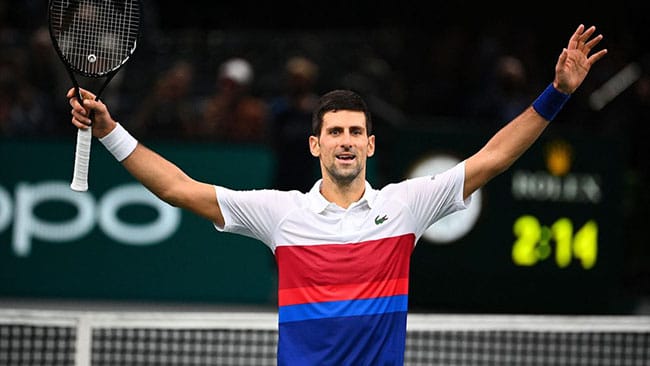 The world’s top ranked tennis player Novak Djokovic was denied entry to Australia after landing in Melbourne this week to play in the Australian Open.

Djokovic, according to his lawyers had a vaccine exemption to enter Australia after a Covid infection on 16 December, his lawyers say.

He is presently in an immigration detention center while awaiting a court case on Monday.

This has caused an uproar in Australia and made headlines around the world.

The issue is that Djokovic, 34, who has said he is opposed to vaccination, had been granted a medical exemption to play in the tournament. This decision has enraged many ordinary Australians.Then he was denied entry on landing.

On Wednesday, Australian Border Force (ABF) officials said the player had “failed to provide appropriate evidence” at Melbourne Airport because a prior infection was not a valid reason to enter without a vaccination.

Prime Minister Scott Morrison later confirmed that this was the case under federal rules – despite an exemption provided by the Victorian state government.

In court documents released on Saturday, Djokovic’s lawyers said the player had been granted a temporary visa to enter the country and provided with a “medical exemption from Covid vaccination” by Tennis Australia because of his recent infection.

When the case comes to court on Monday, it appears that Djokovic’s lawyers will effectively say that the decision to revoke the visa was affected by a variety of “jurisdictional errors”.

They will argue that the correct procedures were not followed in revoking the document – for example questioning whether the player was properly informed of the move to cancel the visa and whether he was given the correct legal opportunity to respond.

Another key argument – the documents suggest – will be over whether border officials misconstrued the guidance around what constituted a medical reason not to be vaccinated.

There had been no prior announcement of Djokovic’s Covid infection, which was confirmed by a PCR test on 16 December.

But on 17 December, Djokovic posted images to Twitter of him without a mask at a ceremony in which he was honored with his own Serbian postage stamps in recognition for his achievements.

It is unclear whether he knew he had Covid when the photos were taken.

Djokovic’s medical exemption certificate was given by two independent medical panels organized by Tennis Australia, the body that runs the event, and the state of Victoria.

His lawyers said he was kept in immigration clearance at Melbourne Airport for about eight hours after he arrived, and that he had little communication with them during that period.

They have also asked that Djokovic, who remains in an Australian hotel with asylum seekers be moved to “a more suitable place of detention” that would allow him to train ahead of the Australian Open.Another player, Renata Voracova from the Czech Republic, has also had her Australian visa cancelled despite proof of having Covid before Christmas, the Czech government said.

Voracova is being held at the asylum hotel as Djokovic, the Park Hotel, and has described it as being “like in prison”.

“I can’t say they were mean to me,” she told Czech news website Idnes, “but I was not prepared for the way everything played out… you have to report and everything is allotted.”

Australia’s pandemic border rules ban foreigners from entering the country if they are not either double vaccinated or have a medical exemption from having the jabs.

While foreigners can fly in to Australia on a visa applied for online, they must still clear immigration customs on arrival at the airport.

The Australian Open begins on 17 January in Melbourne.