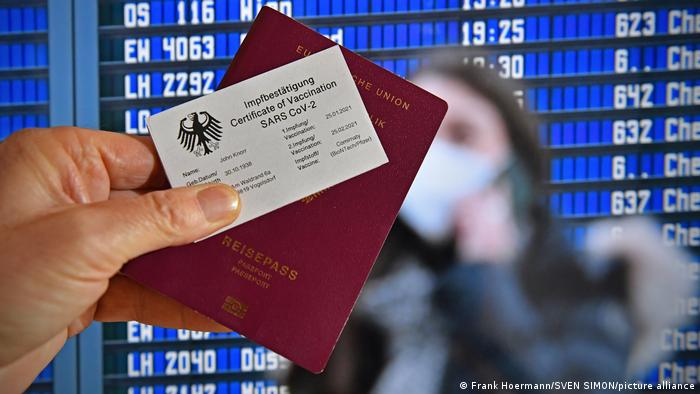 The purpose officials say is to enable anyone vaccinated against Covid-19, or who has tested negative or recently recovered from the virus to travel within the EU.

EU citizens will have access to this digital certificate for foreign travel “without discrimination”, European Commission officials say.

The 27 member states will decide how to use the new digital certificate.

Vaccine passports have faced opposition from some EU member states over concerns they might be discriminatory.

Some argue that they would enable a minority to enjoy foreign travel without restrictions while others, such as young people who are not seen as a priority for inoculation, continue to face measures such as quarantine.

Another issue raised has been that data on the efficacy of vaccines in preventing a person from carrying or passing on the virus is incomplete.

Ahead of the EU’s announcement, the World Health Organization (WHO) said that it was working to “create an international trusted framework” for safe travel, but that vaccinations should not be a condition.

Meanwhile, in the UK, Business Secretary Kwasi Kwarteng said the government was looking at the idea of vaccine passports and had been “discussing what the best way to proceed is”.

“We are having debates, discussions about travel… but I think what we also have to do is be driven by the data, we’ve got to see how coronavirus develops,” he told the BBC.

More than a third of the UK population – nearly 25 million people – have received at least one dose of coronavirus vaccine in the UK, which is no longer a member of the European Union.

The rollout across the EU has been slower, and has been hindered by delayed deliveries as well as the current suspension in several countries of the use of the Oxford-AstraZeneca Covid-19 vaccine over fears of possible side effects.

What do European countries think about this?

The economies of countries such as Greece, Spain and Italy are unlikely to recover until the tourist industry is reopened, and they have been looking at ways to save the summer season while providing a safe environment for both travellers and local residents.

Greek Prime Minister Kyriakos Mitsotakis on Wednesday welcomed the planned certificate, which he said would “significantly facilitate the movement of citizens and will help boost tourism and the economies that rely heavily on it”.

Last month, Greece’s Deputy Prime Minister Akis Skertsos said that a common digital certificate was “not discriminatory”, and that non-vaccinated tourists could also visit Greece this summer – but the procedure for them would be slower as they would have to be tested and might have to self-isolate on arrival. https://emp.bbc.com/emp/SMPj/2.39.19/iframe.html A hotel manager in the Spanish resort of Benidorm, Ricardo Sánchez, told the BBC that the UK was its most important market, followed by Belgium, the Netherlands, and people arriving from Eastern Europe.

“So many months working with so many restrictions and the restrictions are changing every 15 days,” he said, adding that would-be tourists were unsure what to do and were waiting for “good news” before booking reservations.

Iceland has said it is opening its borders to visitors who have received the vaccine without the need for testing or quarantine later this week.