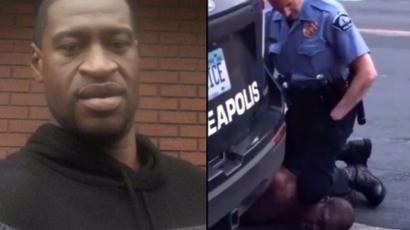 A police officer was filmed kneeling on the neck of George Floyd, 46, despite him saying he could not breathe.

A Video of the incident shows the white police officer pinning down George Floyd a black man, believed to be in his 40s, to the pavement with his knee on the man’s neck for several minutes. Floyd was identified by prominent civil rights lawyer Ben Crump, who said he had been retained by the Floyd family.

he death has added to the already sizzling anger over police killings of black Americans, including Breonna Taylor in Kentucky.

A CNN journalist, Omar Jimenez, and his camera crew were arrested live on air by Minnesota state police officers on Friday morning, apparently because they did not move on when instructed. They were released an hour later.

There have also been demonstrations in other US cities, including New York, Los Angeles, Chicago, Denver, Phoenix and Memphis.

Minnesota governor Tim Walz said justice would be served for George Floyd, saying he was “confident” in the prosecutors involved in the case.

President Trump’s initial response was that he feels “very, very badly” for what happened to George Floyd, but said he has not yet spoken with Floyd’s family. But in recent tweets, Trump seemed to imply that the US military could become involved and protesters could be shot if violence continued in the city.