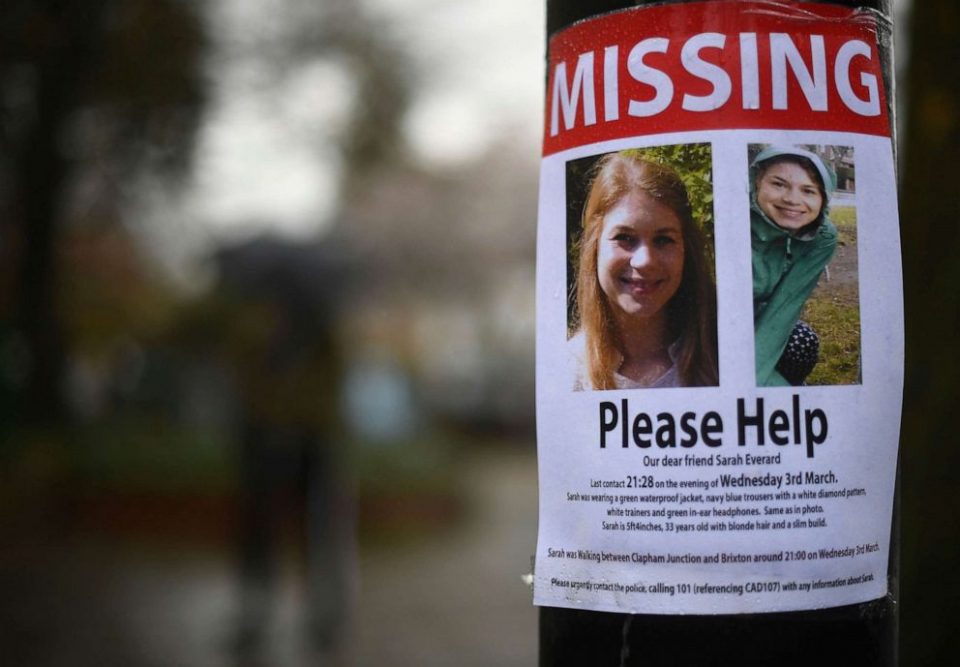 Earlier this month, Everard went missing while walking home to Brixton after visiting a friend in Clapham– just 50 minutes away walking.

Sarah Everard was a 33-year-old marketing executive from South London, her disappearance and death has led to the arrest of a police officer accused of murdering her and sparked a national outcry in the United Kingdom over violence against women.

Speaking about Everard and her family, Prime Minister Boris Johnson said on Saturday, “I cannot imagine how unbearable their pain and grief is. We must work fast to find all the answers to this horrifying crime,” adding, “I will do everything I can to make sure the streets are safe and ensure women and girls do not face harassment or abuse.”

Johnson and his fiancée Carrie Symonds lit a candle on Saturday in tribute to Everard, as did Scotland’s First Minister Nicola Sturgeon. Wales’s First Minister Mark Drakeford said that people should “ignite a fire for change”.

On March 3, Everard left Clapham at 9 PM, and is believed to have walked through Clapham Common, a large park, while on the way home. After she left, Everard spoke to her boyfriend on her mobile phone for around 14 minutes, and was last spotted in the footage of a doorbell camera at 9:28 PM.

A day later, on March 4, Everard’s boyfriend contacted the police to report that she was missing. The police then sought public help in tracing her whereabouts, and posted tweets to elicit response from Londoners.

Who has the police arrested?

According to the New York Times, London’s Metropolitan Police then searched around 750 homes in South London, as well as the ponds in Clapham Commons park, and subsequently extended their search to the county of Kent in southeastern England.

Then, this week on Tuesday (March 9), the police made two arrests—the first was a 48-year-old police constable, Wayne Couzens, on suspicion of kidnapping, and the second a woman in her 30s on suspicion of assisting an offender.

Couzens, who had been with the Met for two years, had first been posted in South London, and was most recently serving in the Parliamentary and Diplomatic Protection Command, the unit tasked with protecting UK’s Parliamentary estate and embassies in London. The police said that Couzens had not been on duty at the time of Everard’s disappearance.

According to reports in The Guardian and the NYT, Couzens is also suspected of indecent exposure in a separate incident—which the police is now investigating.

On Wednesday (March 10), the police discovered bodily remains in a wooded area of Ashford town in Kent, and on Friday (March 12) confirmed, through the use of dental records, that the body belonged to Everard.

Announcing Couzens’s arrest, Met assistant commissioner Nick Ephgrave said, “This is a serious and significant development in our search for Sarah and the fact that the man who’s been arrested is a serving Metropolitan police officer is both shocking and deeply disturbing”.

On Friday (March 12), Couzens was charged with Everard’s kidnapping and murder after authorisation from the Crown Prosecution Service. After appearing before a magistrate’s court on Saturday (March 13), Couzens has been remanded in custody and will be brought before the Central Criminal Court (also called Old Bailey) on Tuesday (March 16).

Public anger against the police

As the case progressed through the week, women across the UK swamped social media with posts describing their own experiences of walking the streets, with many recording incidents when they had been catcalled, followed, harassed, followed and exposed to.

On Saturday, several hundred people gathered at the Clapham Common to mourn Everard, despite a planned vigil being cancelled after the police cited Covid-19 restrictions. Some of the signs at the rally read, “She was just walking home” and “We are the 97 percent”– referring to a recent survey that found that almost all women in Britain had endured harassment.

The event ended in violence as the protesters and police clashed, and officers handcuffed and led women away from the event amid cries of “shame on you” and “let them go”. Four people were arrested.

The police’s handling of the event invited criticism from across the political spectrum, with Britain’s Home Secretary Priti Patel calling video footage from the rally “upsetting” and asking the Scotland Yard for a “full report on what happened”.

London Mayor Sadiq Khan also said that the scenes were “unacceptable” and that he was “urgently seeking an explanation” from the commissioner.