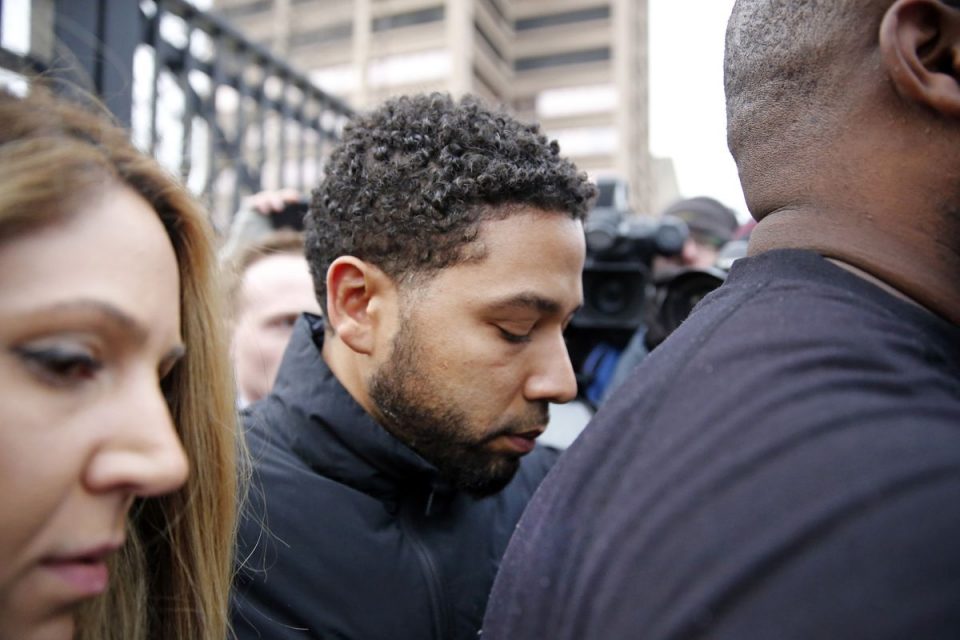 The  actor Jussie Smollett  was on the stand at his criminal trial Monday to deny charges that he lied to the Chicago Police after staging a fake hate crime in January 2019.

The Osundairo brothers had last week testified that Jussie paid them to carry out the fake hate crime to get media coverage and sympathetic attention.

The  brothers “Bola” and “Ola” testimony as well as that of five Chicago police investigators, formed the core of the prosecution’s case against Smollett.

But Jussie who is gay testified under oath on Monday, for over five hours and denied arranging the attack and suggested the brothers — whom he knew from the “Empire” set — may have had other motivations at play.

The actor was on the stand till the end of the day when court scheduled to resume Tuesday morning with special prosecutor Dan Webb picking up his cross-examination.

According to Smollett on Monday, Bola Osundairo, helped him get drugs, including cocaine. He also said a sexual relationship began between them at a particular Chicago bath house. One night the two were out, and Smollett testified they got a private room and “did more drugs and like, made out.”

He added that there was another time he and Bola Osundairo snuck away from his brother after the three were at a female strip club together. Smollett testified they again got a private room and “made out a little bit, masturbated together.”

On the other hand, last week Bola Osundairo had denied they had a sexual relationship and said he “didn’t know” there was even any sexual tension.

Smollett testified further Monday he wasn’t friendly at all with Ola Osundairo.

He continued that after he received a “hate letter” the “Empire” studio in Chicago on January 22, 2019 — seven days before the alleged attack — Bola Osundairo offered to becoming his personal security guard as he has asked several times before.

“Around lunch time I would smoke my blunt, drive around the neighborhood of the studios. I don’t want to be in someone’s car,” Smollett said.

Smollett told the jury that while driving around with Bola Osundairo, there was never any discussion of planning a staged hate attack.

“Did you talk to him about some hoax?” defense attorney Nenye Uche asked.

“No,” Smollett shot back.

“Did you give him the check as payment for some silly hoax?” Uche then asked.

In February 2019, Smollett rejected some of what has been reported, including that he told police his alleged attackers were wearing MAGA hats.

The actor said no when Uche asked whether he ever told police the alleged attackers were wearing the hats.

Smollett added that one of the reasons he did not give a police detective his cell phone when she asked for it was because he didn’t think police believed his story.

Smollett appeared to briefly get emotional while describing the incident to jurors, prompting his attorney to ask whether he was all right.

Smollett, 39, has pleaded not guilty to six counts of disorderly conduct, and if convicted could spend up to three  years in prison. His defense attorneys have said he was a real victim and have suggested during the trial that homophobia may have been a motive in the attack.

The decision to testify in one’s own defense is a high-risk move because the prosecution is allowed to closely cross-examine the defendant.

The trial so far

Seven witnesses were called over the course of three days of testimony last week.

First, five police investigators testified that Smollett told them two men had attacked him in the street, yelled racist, anti-gay and pro-Trump remarks, put a noose around his neck and poured bleach on him.

Bola and Ola Osundairo testified that Smollett had actually directed them and paid them to stage a fake hate crime in an attempt to get sympathetic media coverage and further his acting career.

“Who was in charge of this thing?” Webb asked.

Smollett’s defense, meanwhile, has argued he was actually attacked in a hate crime. They called three witnesses last week, including Smollett’s former music manager and publicist.

On Monday morning, an “Empire” executive producer testified that the show had received a threatening letter in the mail a week before the January 2019 incident. The producer, Brett Mahoney, said Smollett did not want the letter publicized.

There have been outbursts, heated exchanges with the Judge James Linn and inflammatory questioning of witnesses.

Defense attorney Tamara Walker actually sobbed in court after Judge Linn asked the defense to move on from a particular line of questioning. She requested for a mistrial, saying the judge had “lunged” at her during a sidebar conversation.

The judge denied the accusation and denied the motion for a mistrial, saying he was stunned by the request.

“Ms. Walker, there were objections that had to be sustained and I was trying to get back on point,” the judge said. “Just because you think you were allowed to go one way, we’re all just doing our jobs.”

The incident which led to this in 2019, has put a halt to Smollett’s acting career. His character was written off “Empire,” which ended in 2020, and though he has since directed and produced a film, he has not appeared on screen again.