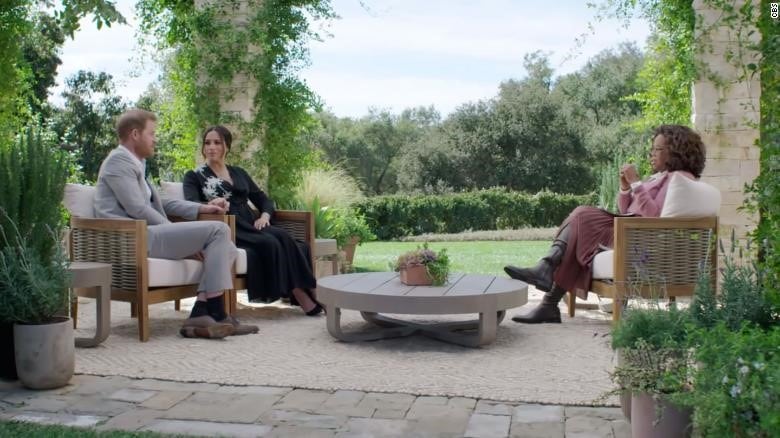 In soon to come interview with Oprah, Prince Harry has compared his “unbelievably tough” split from the royal family to the experience of his mother, Princess Diana.

Harry said he “can’t imagine what it must have been like” for Diana to go through a similar experience, in one of two videos released from the program.

The discussion is the first interview the couple; Harry and Meghan, Duchess of Sussex have given together since they “stepped back” as working members of the royal family last year.

“I’m just really relieved and happy to be sitting here talking to you with my wife by my side,” Harry said in the clip. “Because I can’t begin to imagine what it must have been like for her, going through this process by herself all those years ago.”

“It has been unbelievably tough for the two of us, but at least we had each other,” he said, sitting next to Meghan in an outdoor set.

In another clip, Harry adds that his “biggest concern was history repeating itself,” seemingly another reference to his mother’s experience.

Diana separated from Prince Charles and was largely shunned by the royal family in a highly publicized break-up during the 1990s. She died in a car crash in 1997, and Harry has frequently criticized the strong media coverage she faced as a contributing factor to her death.

At one point the Winfrey tells the couple there is “no subject that’s off-limits” in the discussion, and she later says “you’ve said some pretty shocking things here.”

“Were you silent, or were you silenced?” Winfrey asks Meghan at another point in the promo, which promptly cuts away from the duchess’ answer. Meghan is not heard from in either of the promotional clips.

The interview is set to air on March 7, and will be expected to touch on a number of topics including the support Meghan received from the royals.

Harry and Meghan have not taken part in media engagements in the year since they stepped away from the royal family, a move that caused a crisis at Buckingham Palace in early 2020.

“We all know what the British press can be like, and it was destroying my mental health,” Harry said during the segment with Corden. “I was like, this is toxic. So I did what any husband and what any father would do.”

It was confirmed in February that the couple would not return as working members of the royal family.