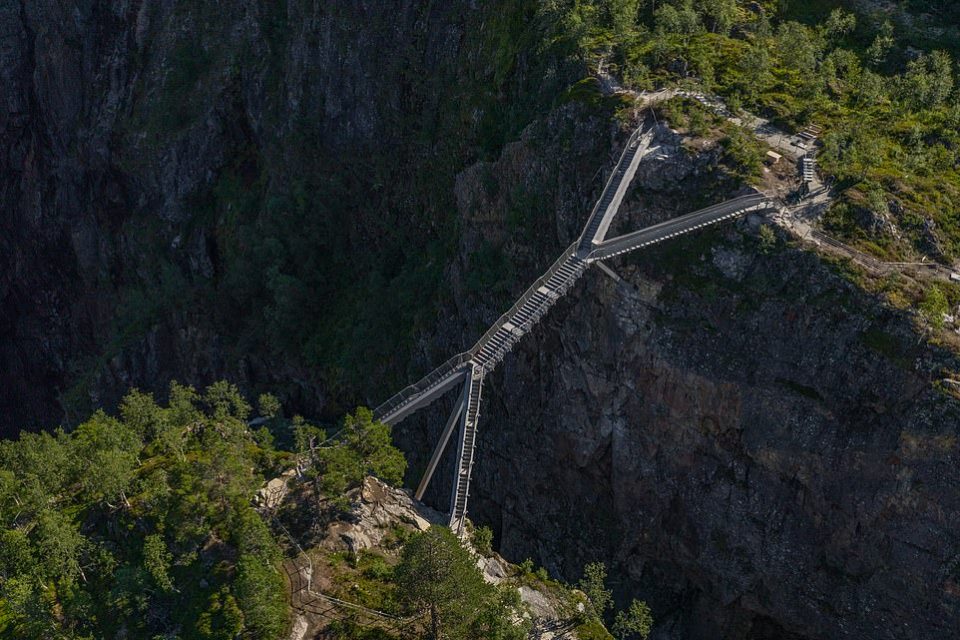 People can now cross the gorge above the 182-metre tall Vøringsfossen Waterfall via a new footbridge recently completed by the Norwegian Public Roads Administration.

The project, designed by architect Carl-Viggo Hølmebakk, has been a long time coming. It is now ready for anyone brave enough to negotiate the 99 steps connecting the two sides of the stunning Måbødalen valley, in exchange for an unparalleled view of the tumbling waters of Vøringsfossen.

The attention-grabbing, floating-on-air design is inspired by Norwegian folklore and the country’s Romantic tradition, says Hølmebakk.

Turning this concept into a reality wasn’t easy — alongside more conventional building methods, the team had to use helicopters and mountaineers.

This is the dramatic Vøringsfossen waterfall bridge, a newly opened tourist attraction offering incredible views of the spectacular landscape near Eifjord in Hardanger, western Norway.

The waterfall has a free fall of 145 metres and a total fall of 182 metres, with its water plunging from the Hardangervidda into to the valley of Måbødalen.

The stair bridge was assembled in seven parts, has a span of 47 meters and a height difference of 16 meters.