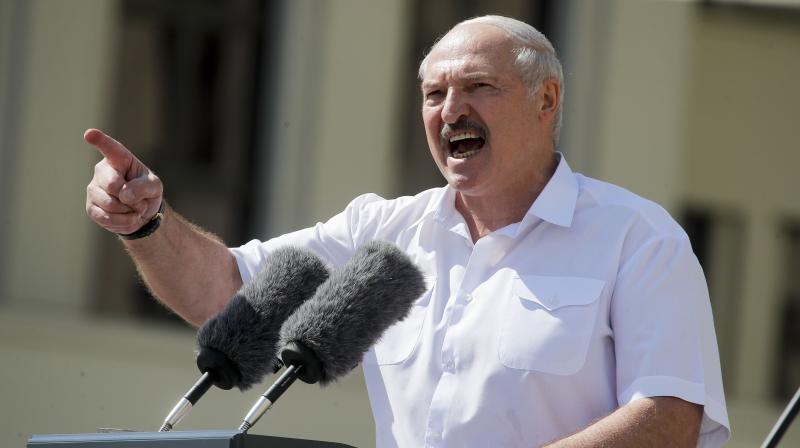 Belarus’ President Alexander Lukashenko has refused the country new elections “until you kill me,” according to videos posted online by local news outlets.

He made the comments while visiting a Minsk factory Monday, where he was booed and a group of workers chanted “Leave!” in unison.

In response to his remarks the crowd chanted: “Yes, yes without you.”

Lukashenko who has been in power for 26 years, is facing great pressure from inside and outside the country, after fresh strikes, angry protesters, international condemnation and a direct challenge to his position left him clinging to power.

The country’s August 9 election has been criticized for not being free or fair.

The opposition candidate Svetlana Tikhanovskaya offered Monday to act as the country’s “national leader” to help bring peace to Belarus a day after large protests in the capital Minsk to demand a new presidential election.

Tikhanovskaya said: “I am ready to assume the responsibility and act as a national leader in order for the country to calm down and enter the normal rhythm.” She said she would hold a fresh vote and offered support for the swelling demonstrations and industrial action across the country.

She also appealed to the country’s security forces to switch sides and turn against the President, promising to “accept” repentant law enforcement officers — and called on Lukashenko to release political prisoners being held in jails in Belarus.

Further industrial action is planned on Monday after numerous reports of walkouts in recent days.

Lukashenko told the throng of displeased factory workers: “Even if you shoot me tomorrow there are already other people who are going to work.”

The President said that he would be willing to share power and to change the constitution but won’t do so under pressure from “the streets,” in a reference to the mass protests.

“A new constitution is needed,” he added. “Two options were offered to me. I rejected them because they are not very different from the current one. Work is underway on a third version. Come, sit down and work on the constitution and I will transfer you the powers according to the constitution. But not under pressure from the streets!”

“Yes, I’m not a saint. You know my toughness. You know that if there was no toughness, there would be no country. You know for sure that I will not offend your children and I will not give up the country to anyone. This is the main thing,” Lukashenko said.

EU leaders will meet via video conference on Wednesday to discuss the situation, European Council President Charles Michel said on Monday. “The people of Belarus have the right to decide on their future and freely elect their leader,” Michel said in a tweet. “Violence against protesters is unacceptable and cannot be allowed.”

Meanwhile, German Finance Minister and Vice Chancellor Olaf Scholz told Bild newspaper on Monday that Lukashenko is a “bad dictator,” adding: “I am firmly convinced that this President no longer has any legitimacy, otherwise he would not act with such incredible, such brutal, violence.”

US President Donald Trump also spoke about the situation on Monday.

“That’s a terrible situation, Belarus. We’ll be following it very closely,” he said, when asked to weigh in by a reporter on the south lawn of the White House.

Lukashenko has in the meantime reached out for  Vladimir Putin — reportedly holding two phone calls over the weekend with the Russian President whose country still has influence in Belarus.