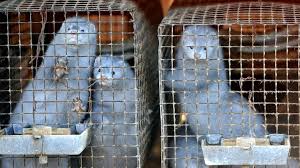 Starting in Utah, Coronavirus outbreaks are killing  mink populations in the U.S., first in Utah, and now in Wisconsin. Over 12,000 mink have recently died from the virus, forcing a lot of farms into quarantines.

Since first case in August, nearly 10,000 mink have died in Utah fur farms, a spokesperson from the Utah Department of Agriculture and Food (UDAF) told CBS News on Friday. The state veterinarian, Dr. Dean Taylor, told The Associated Press that no animals were euthanized due to the virus.

The United States Department of Agriculture’s (USDA) National Veterinary Services Laboratories (NVSL) said that humans working on the farm that were infected with COVID-19 in July likely transferred the virus to the animals — there are no signs that the mink infected any workers. Still, the USDA and the Centers for Disease Control and Prevention (CDC) have issued guidelines for farmers handling mink and other mustelids.

“The research done in Utah still supports that the disease has spread from humans to mink and that the risk of the opposite transmission is very low,” the UDAF spokesperson told CBS News. “We still recommend PPE for all mink workers as a safeguard to themselves and the mink.”

The UDAF said they are not aware of how many mink total are infected in Utah. Testing all of them is “not feasible” due to the large number of mink in the state, the spokesperson said.

Officials said that fur from the dead, infected mink is still being used commercially. Fur Commission USA told AP that the fur is processed to eliminate all traces of the virus before it is used for clothing.Wisconsin, the largest fur-producing state became the second state with COVID-infected mink this week, On Thursday, NVSL confirmed that dead mink in Wisconsin tested positive for SARS-CoV-2, the virus that causes COVID-19.   The state had also broke a single-day record of new human COVID-19 cases the same day, with 3,132).

A spokesperson for the Wisconsin Department of Agriculture, Trade and Consumer Protection (DATCP) told CBS News on Friday that the outbreak is confined to a single farm, which is now under strict quarantine. More than 2,000 mink on that farm have died so far from the outbreak.

As of Wednesday, the USDA reports that mink in Michigan also tested positive for the virus.

According to Taylor, the virus behaves in mink similarly to how it behaves in humans.

Younger mink are less likely to contract the virus, and most deaths occur among older mink, ages 1 to 4 years old. Difficulty breathing is a common symptom, but the virus progresses extremely quickly, killing most infected mink by the next day.

The Utah outbreak, which began in August, was the first among mink in the U.S., but there have been even larger outbreaks globally.

According to reports, officials in both Spain and the Netherlands killed thousands of mink earlier this year due to fears that they could spread coronavirus to humans. Last week, Denmark, the world’s largest producer of mink, announced it will kill about 1 million mink due to a large coronavirus outbreak at breeding farms, Reuters reports.

Researchers have reported that mink are especially susceptible to the virus due to a specific protein in their lungs. The Netherlands has now moved up its deadline to end mink fur farming by three years to prevent future outbreaks.

The Humane Society of the United States has called the inaction by the U.S. government “indefensible.”