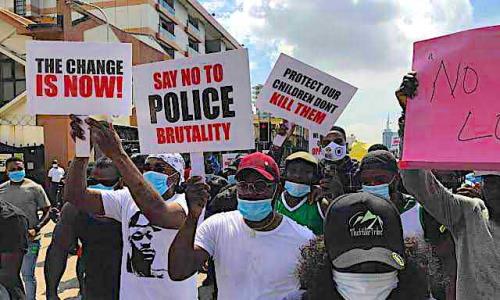 The rage boiling in the citizens of Nigeria and in full discussion on Twitter finally boiled over on Friday when activists and Nigerian celebrities organized mass protests across major cities in the country demanding an end to police brutality in Nigeria.

The protests have been a long time coming as the country’s young people have been expressing their anger and outcry online over claims of kidnapping, harassment and extortion by a police unit known as the Special Anti Robbery Squad (SARS).

It started on Thursday when a protest was led in Lagos Island by Folarin Falana also known as Falz, a lawyer and singer, and Runtown, an artist known by that stage name.

They were also joined by Nigeria’s female performer, Tiwa Savage.

Falz, told CNN it was important for him to march because there have been “too many numerous incidents of harassment, extortion and police brutality,” in the country. He added that he, too, had been a victim of harassment at the hands of the Nigerian police.

“People have been posting online about it for years, but it has been the same sluggish attitude and response to it. Nothing has changed and people keep on being harassed. That’s why we have taken to the streets and we want the government to listen,” he said.

“I am marching for the ones that are not recognized. We are surprised by the numbers that came out and we are prepared to march again,” he added.

Protests continue into the night

A group of protesters, led by Debo Adebayo, a comedian by the stage name of Mr Macaroni, held a protest vigil, running into the third night in a row, in Alausa, Lagos.

Nigeria’s police force had responded to the public outcry last Sunday by banning the unit from carrying out any stop-and-search activities.

SARS, as well as other tactical police units, are now prohibited from “carrying out routine patrols and other conventional low-risk. duties — stop and search duties, checkpoints, mounting of roadblocks, traffic checks, etc — with immediate effect,” Nigeria police chief Mohammed Adamu said on Sunday in a statement.

“Voices and complaints on the issues of unprofessional conducts by some SARS operatives have been heard very loudly and clearly,” the statement read.

Feyikemi Abudu was among the protesters outside the Lagos State Assembly in Ikeja on Friday. She told CNN their demands were presented to the assembly, which held an emergency session Friday to listen to their demands.

“There are many demands, but the main one is to scrap SARS, not to reform it but to completely end it. Another demand is compensation for victims of SARS brutality, both alive and dead. We also want a committee that will investigate and look into the present and past grievances around SARS brutality, ” Abudu said.

Abudu also told CNN she has raised 1.3 million naira (about $3,390) to buy food for those protesting and for medical treatment for those injured during the protests.

Media personality Toke Makinwa was also among those who protested. “People are constantly calling my show with reports of harassment,” she said.

“One man told me they pulled his phone and searched his banking app, they took him to an ATM to withdraw money for them. Nigeria has reduced its citizens to doing everything by themselves. SARS should not be one of the problems we have to face. You are supposed to be anti-robbery but we are afraid of you. People who are meant to protect are the ones oppressing us.”

What the police say

The  Lagos spokesman for Nigerian police force  Muyiwa Adejobi said that all complaints against its officers are carefully investigated and appropriate sanctions applied to offenders.

The police say that the ban on the SARS unit is one of many steps towards reforming the outfit.

The issue with a ban is that this is not the first time authorities in Nigeria have censured the SARS unit. This is why the protesters are calling for a total scrap of the unit.

In 2018, Nigeria’s Vice President, Yemi Osinbajo, while deputizing for the President who was out of the country on vacation at the time, ordered the unit to be overhauled. In January 2019, the police announced another ban on the same police unit.

But the human rights organization Amnesty Nigeria says not much has changed since these bans were put in place.

“A similar ban on SARS did not end police brutality because it appeared the bans were simply done to assuage the swelling public anger at the time of the announcement and not intended to end police brutality,” Amnesty Nigeria’s program manager, Seun Bakare, said.

In an email to CNN, he said as a result of past campaigns, some reforms like “the passage of the anti-torture act 2017, the signing of the new police act” and other minor amendments have been passed.

The anti-torture act of 2017, for example, is supposed to protect Nigerians, including suspects and detainees from torture and inhumane treatment. However, there seems to be a lack ofpolitical will to enforce these laws, Bakare said.

The hashtag #EndSARS, #StopPolicebrutality has continued to trend on Twitter and other social media platforms as people shared their stories, photos and videos that they allege show men in Nigeria police uniforms searching their cars and harassing them.

Adejobi, the police spokesman, said only incidents that are reported are investigated.

Nigeria’s tech community in particular has suffered a lot from police harassment.

Leaders in the community had in 2019 launched a campaign  #StopRobbingUs​, to put an end to the common practice where Nigerian police stop young people with laptops, iphones or have dreads and unlawfully arrest, attack or, in extreme circumstances, kidnap them, forcing them to withdraw funds from their bank accounts in order to regain their freedom.

Flutterwave for example had opened a fund a few days ago as staff donated N2m.

Between 2017 and 2020, Amnesty International said it has documented 82 cases of police brutality in Nigeria.

“Detainees in SARS custody have been subjected to a variety of methods of torture including hanging, mock execution, beating, punching and kicking, burning with cigarettes, waterboarding, near-asphyxiation with plastic bags, forcing detainees to assume stressful bodily positions and sexual violence,” Amnesty’s report said.

Nigeria police chief Mohammed Adamu warned against “the invasion of the privacy of citizens particularly through indiscriminate and unauthorized search of mobile phones, laptops, and other smart devices,” while Nigerian Vice President Yemi Osinbajo recently held a meeting with police chiefs over the issue, according to a statement from the Presidency.

Osinbajo said the president is “very concerned about it, and … wants to see reform.”

“You cannot have a situation where SARS says they are investigating cybercrime by arresting young men and women carrying their laptops and phones. I don’t see how you can investigate that by seizing people’s phones in a taxi or in their cars,” according to tweets attributed to Osinbajo.