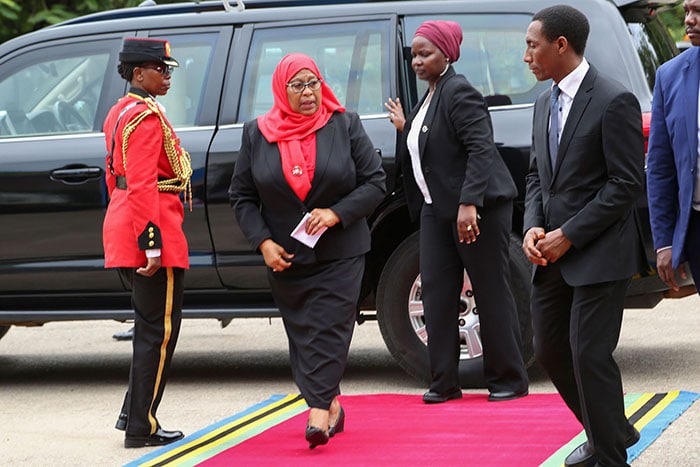 She was sworn in as Tanzania’s president at State House in Dar es Salaam last Friday, making history as the first woman to hold the top job in the East African country.

The 61-year-old’s inauguration comes two days after she announced the passing of President John Magufuli.

Prior to his death, Magufuli had not been seen in public for over two weeks, prompting speculation that he may have been suffering from COVID-19, which he had repeatedly denied was a problem in Tanzania. The government has blamed Magufuli’s death on heart problems.

‘Time to stand together’

In her first public address as president, Suluhu Hassan — who is affectionately known as Mama Samia — said it was a difficult day in her political career.

“Today I have taken an oath different from the rest that I have taken in my career,” she said. “Those were taken in happiness. Today I took the highest oath of office in mourning.”

However she assured Tanzanians that Magufuli, “who always liked teaching,” had prepared her for the task ahead and encouraged national unity.

“This is the time to stand together and get connected,” she said. “It’s time to bury our differences and show love to one another and look forward with confidence.”

Suluhu Hassan will complete Magufuli’s second five-year term in office, which began in October 2020 after he won general elections. Hassan also announced 21 days of mourning for the controversial former president, as well as public holidays on March 22 and March 25, when Magufuli is due to be buried.

Her journey to the top job

Suluhu Hassan began her political journey in 2000 after she was elected as a special seat member of the Zanzibar House of Representatives and appointed a minister. At the time, she was the only high-ranking female minister in the Cabinet.

After serving two terms, she sought election to the National Assembly in 2010, winning the vote by more than 80%. President Jakaya Kikwete appointed her as the minister of state for union affairs and in 2014, she was elected as the vice chairperson of the Constitutional Assembly tasked with drafting Tanzania’s new constitution.

In 2015, Magufuli selected Suluhu Hassan as his running mate — a surprise choice over many more prominent members of the ruling Chama Cha Mapinduzi (CCM) party.

Suluhu Hassan is also the country’s first president born in semi-autonomous Zanzibar. She attended school at a time when very few Tanzanian girls were offered the opportunity of an education outside the traditional roles of wife and homemaker. She is also a practicing Muslim.

The first major challenge facing Suluhu Hassan will be her government’s handling of the coronavirus pandemic going forward.

Under Magufuli, Tanzania adopted very few measures against the spread of COVID-19 and made no efforts to secure vaccines for its population.

“I think there still needs to be continued pressure on Suluhu Hassan, on her government and also everybody else to make sure that the coronavirus is not politicized,” said Sarungi. “That it is taken up and dealt with in a scientific manner … and also starting to prepare Tanzania toward a vaccination plan.”

Suluhu Hassan will also need to secure the support of the CCM party, which has been in power since Tanzania’s independence. As a Muslim woman, she may face some pushback from the party’s entrenched Christian stalwarts.

“We cannot talk about Suluhu Hassan’s presidency without talking about the ruling party CCM,” explained Sarungi.

“I think the CCM will determine and have a very big influence on her presidency. What needs to be seen is who is she going to become when she’s not the one receiving orders, but giving orders.”

However, Suluhu Hassan’s first public address offered some few clues as to how she might approach her new role.

“It was too controversial in the sense that she talked about reconciliation and burying the differences,” said Sarungi. “This is a very flippant remark when there are serious issues including abuses of human rights…These are issues that she needs to start grappling with in a more meaningful way.”

Her style of leadership

Suluhu Hassan’s leadership style is purportedly quite different to Magufuli’s. The late president was dubbed “The Bulldozer” for his brash and intolerant approach towards policymaking.

In contrast, Suluhu Hassan has been described as a much more diplomatic political figure, known among her colleagues for following the correct procedures and calmly managing conflicts among MPs.

“She does have good negotiation skills,” said Sarungi. “I think the fact that she’s very calm and doesn’t often show emotions but is firm, as well as the fact that she’s got a sense of humor. And of course that contrasts very sharply with the late president, Magufuli.”

Whether she will remain loyal to Magufuli’s controversial policies or push for change remains to be seen. Her predecessor drew criticism for banning pregnant girls from attending school and urging women to stop taking birth control pills.

However, many Tanzanians still expressed approval and respect for the decisions Magufuli made while in office.

Suluhu Hassan has not been afraid to go against the grain of her own party in the past: In 2017, she visited opposition leader Tundu Lissu at a Nairobi hospital following as assassination attempt, with many speculating that state forces were involved. Pictures of their meeting made headlines across Tanzania and caused a stir amongst CCM party members.

But Sarungi cautioned against expecting too much from her too soon.

“I think the expectations are huge,” she said. “Tanzanians are very eager to open up a new chapter after a very dark, controversial and extremely divisive five-and-a-half years of John Magufuli.”