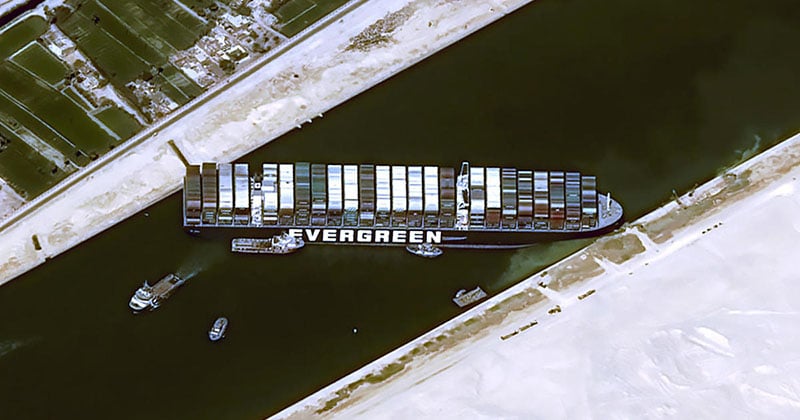 The much talked about cargo ship is the size of the Empire State Building and has been jammed in this very important trade route for days.

The Suez Canal is one of the world’s most important trade routes and this is  costing $400 million per hour in delayed goods, Lloyd’s List estimated.

The vessel, called the Ever Given , has been lodged in the canal, which runs through Egypt, since early Tuesday. The canal is a vital shipping route that connects Europe to Asia.

The average number of vessels passing through the canal each day is 93, meaning that nearly 300 vessels have already been blocked thus far, with the jam not yet close to being cleared and the possibility that it could take weeks to dislodge the ship. The ship’s owner, Japanese company Shoei Kisen, said Friday that it hoped to free the vessel on Saturday, according to Nikkei Asia .

The blockage affects the already-strained global supply chain , which has experienced shortages and shipping delays since the corona virus pandemic began last spring. It has also forced some ships to reroute and instead make the long, dangerous, and costly journey around Africa’s southern tip.

The Ever Given, which is slightly larger than the Empire State Building , ran aground Tuesday morning and is stuck diagonally across the canal. Crews have attempted to clear the sand and mud from around the ship, while tugboats have tried to shift the vessel.

Looted Benin Bronze being returned to Nigeria by a UK university