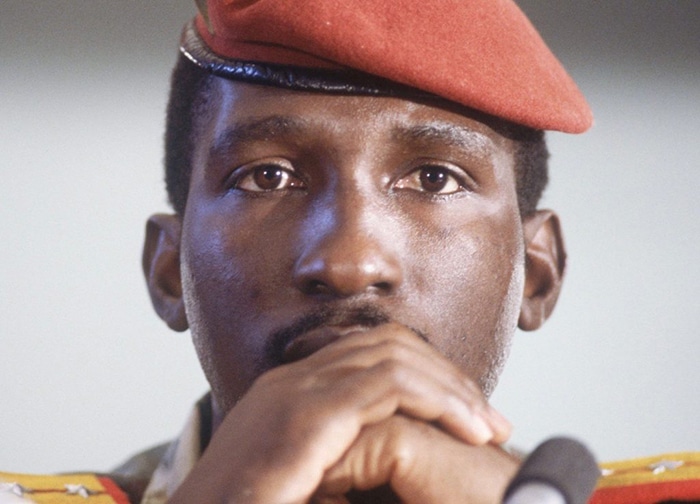 Known as Africa’s Che Guevara, Thomas Sankara was Burkina Faso’s revolutionary anti-imperialist leader. He took a stand against corruption and was an advocate for women empowerment, he is known as one of Africa’s greatest revolutionaries and thinkers. His time as President of Burkina Faso was cut short.

Sankara was born on December 21, 1949 in Yako, Upper Volta in present day Burkina Faso. While his Roman Catholic parents wanted him to become a priest, he opted for a military career instead. His time training as an officer in 1970, at the age of 20, in Madagascar made a huge impression on him. There he witnessed a popular uprising of students and workers that succeeded in overturning Madagascar’s government. After that he attended a parachute academy in France where he was further exposed to left-wing political ideologies. Upon his return to Upper Volta, he received great public attention in 1974 for his heroic performance in the border war with Mali. However years later, he would come to renounce the war as useless and unjust.

Burkina Faso was shaken by a series of labor union strikes and military coups in the early 1980s. While Sankara’s military achievements and charismatic leadership style made him a popular choice for political appointments, his personal and political integrity were not on the same page as the leadership of the successive military governments that came to power. This resulted in his arrest on several occasions.

In 1983, Sankara was selected as the Prime Minister of the newly formed Council for the Salvation of their People (Conseil de Salut du Peuple; CSP), led by Jean-Baptiste Ouédraogo. This new position served as a gateway into international politics, giving him the opportunity to meet with leaders of the nonaligned movement including Fidel Castro of Cuba, Samora Machel of Mozambique, and Maurice Bishop of Grenada. Sankara’s anti-imperialist position and grassroots popularity put him at increasing odds with conservative elements of the CSP, including President Ouédraogo. He was removed as Prime Minister in May and was arrested yet again. But on August 4, 1983 Blaise Compaoré, Sankara’s close friend and army colleague led a group that freed Sankara, overthrew the Ouédraogo regime, and formed the National Council of the Revolution (Conseil National de la Révolution) with Sankara as its President.

In the wake of the coup, Sankara declared the objectives of the “democratic and popular revolution” to be primarily concerned with the tasks of eradication corruption, fighting environmental degradation, empowering women, and increasing access to education and health care, with the larger goal of depleting the imperial dominion of the former French colonial power. He launched one of the most ambitious programs for social and economic change ever attempted in Africa.

In his time as President, Sankara successfully implemented programs that drastically reduced infant mortality, increased literacy rates and school attendance, and increased the number of women who held governmental posts. He promoted public health by vaccinating an astonishing 2.5 million children against meningitis, yellow fever, and measles. In his first year of presidency, 10 million trees were planted in an effort to reverse environmental degradation and combat desertification.

To symbolize the new autonomy and rebirth, Sankara changed the country’s name from Upper Volta to Burkina Faso, meaning “land of upright people” in Mossi and Dyula, the country’s two most widely spoken indigenous languages. Sankara’s foreign policies centered around anti-imperialism, abstaining from all foreign aid. He also pushed for debt reduction, nationalized all land and mineral wealth, and averted the power and influence of the International Monetary Fund and World Bank. When it came to his commitment to women’s rights, Sankara outlawed female genital mutilation, forced marriages, and polygamy while encouraging women to work outside the home and stay in school.

His critics on the other hand point to the extremes he had to go to  in order to achieve the change in society he desired. Sankara increasingly exerted authoritarian control over the nation, eventually banning unions and a free press, believing it could stand in the way of his plans. To counter his opposition in towns and workplaces across the country, he tried corrupt officials, “counter-revolutionaries” and “lazy workers” in Popular Revolutionary Tribunals. But to many of Africa’s poor his revolutionary programs for African self-reliance made him an icon.

In spite of the great changes and progressive measures that were taking place, there was still growing dissent in the country. This was partly due to economic problems and opposition from traditional quarters to some of Sankara’s more progressive social policies. While he remained popular with most of his country’s impoverished citizens, his policies alienated and antagonized the interests of a variety of groups including the small but powerful Burkinabé middle class, the tribal leaders whom he stripped of the long-held traditional right to forced labor and tribute payments, and France and its ally Ivory Coast. Over time, his administration lost popular support and internal conflict within his government brewed as well.

On October 15, 1987, Sankara and 12 others were pumped with bullets by a hit squad during a coup that brought his friend and comrade-in-arms Compaore to power. A week before his assassination, Sankara had said: “while revolutionaries as individuals can be murdered, you cannot kill ideas.”

Burkina Faso has now opened trial on 14 men, including a former president, Blaise Compaore over the 1987 Sankara assassination. The country has long been burdened by silence over the assassination – during Compaore’s long time in office, the subject was taboo – and many are angry that the killers have gone unpunished.

“The trial will mark the end to all the lying – we will get a form of truth. But the trial will not be able to restore our dream,” Halouna Traore, a comrade of Sankara and survivor of the putsch, said in a TV interview.