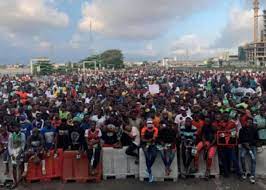 A year after Nigerian youth took their destinies in their hands during the #EndSARS protest, driven by pain and united by a shared resolve, they took to the streets to protest the extrajudicial killings of young people by the now “defunct” Special Anti-Robbery Squad (SARS) police unit.

The initial successes made came to a devastating halt on a Black Tuesday night at the Lekki tollgate in Lagos State. On October 20, 2020, following the announcement of a state-imposed curfew, military men opened fire on peaceful protesters, whose only crime was sitting waving the Nigerian flag and singing the national anthem. Many lost their lives for the cause that bloody night.

The protest lasted for nearly two weeks in October 2020 before the abrupt halt by the massacre at Lekki Toll gate in Lagos.

According to New Nigeria Network, NNN, a civil society group, one year on, 300 #ENDSARS protesters were still in detention in Lagos, and have not been granted court hearings.

Co-convener of the group, Mr Adesina Ogunlana, told Vanguard: “It is disheartening to note how the system is mangling the lives and destinies of those captured by government over #EndSARS disturbances in October 2020.

“Hundreds of citizens who were arrested as ‘#EndSARS protest criminals’ by security agencies are languishing in prisons, with none of them undergoing trial at the courts.

“Information at our disposal does not indicate any arraignment at all of those already slated for trial at the High Court, courtesy of the legal advice of the Director of Public Prosecution, DPP, Lagos State, acting on behalf of the Attorney-General of the state since 2020.

“For the other category slated for trial at the Magistrate Courts, there has been no significant progress in the ‘alleged prosecution’ which is more of window dressing.”

Several families have still not found the bodies of their missing who were known to have last time seen protesting at the toll gate — who many eyewitnesses say were shot at, first by members of the Nigerian army and then hours later by police.

Though there is still no official death toll, but an Amnesty International investigation has reported that at least 12 people died at Lekki toll gate and another site on October 20.

Corpses of policemen that died during the protest are said to not have been released to their families for burial after a year.

Sources say the Lagos State Government has not yet released money to conduct an autopsy.

Families of the slain policemen are said to have received cash donations of N10 million each, from the State governor. The state has also awarded scholarships to children of the deceased officers up to university level.