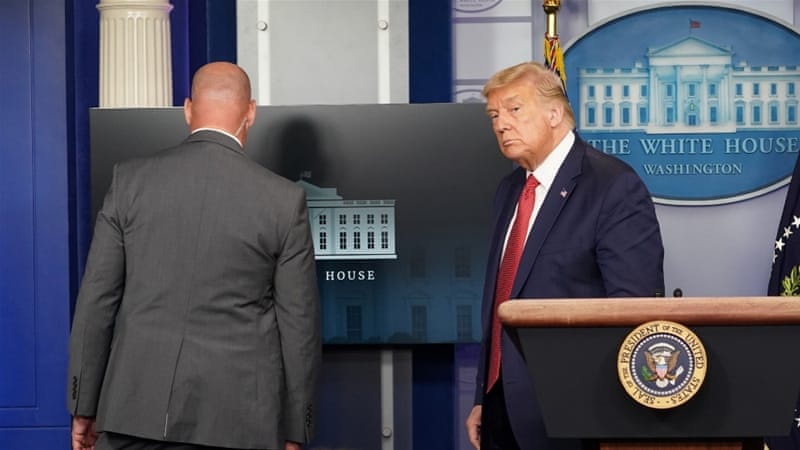 The US Secret Service had to quickly move President Donald Trump out of the White House press room during a briefing because of a shooting outside the White House.

Just after the news conference started on Monday, a Secret Service bodyguard approached Trump at the podium, saying in a quiet voice, “Sir, could you please come with me?”

Trump and staff members left immediately, and the doors to the briefing room, still filled with journalists, were locked.

Service agents with automatic rifles were seen outside rushing across the lawn and taking up positions behind trees and two shots were heard.

Trump returned to the media room minutes later and said a person had been shot by law enforcement and taken to hospital. He said he understood the suspect had been armed.

“It was a shooting outside of the White House,” Trump said.

“It seems to be very well under control … But there was an actual shooting, and somebody has been taken to the hospital. I don’t know the condition of the person.”

In a statement on Twitter, the Secret Service said one of its officers shot a 51-year-old man “in the torso” after he approached the officer and announced he had a weapon.

In the incident, which occurred at about 5:53pm local time (21:53 GMT), the suspect “ran aggressively towards the officer and in a drawing motion, withdrew an object from his clothing”, the statement said. “He then crouched into a shooter’s stance as if to fire a weapon,” prompting the officer to fire his gun.

Both the suspect and the officer were taken to local hospitals, the Secret Service said, adding that it was conducting an internal review of the officer’s actions.

It added: “The White House complex was not breached during the incident and no Secret Service protectees were ever in danger.”

Trump told reporters the shooting was near the fence at the edge of the White House grounds.

Nobody else was wounded in the shooting, he said, praising the Secret Service’s response.

Treasury Secretary Steven Mnuchin and Office of Management and Budget Director Russ Vought were also taken out of the room.

Philipos Melaku, one of a small group of veteran protesters who camp out near the White House, told the AFP news agency that he had heard screaming followed by a gunshot.

“After that immediately, pointing their AR-15s, at least eight or nine men came in running.”

Pope Appoints 6 Women To Senior Positions In The Vatican