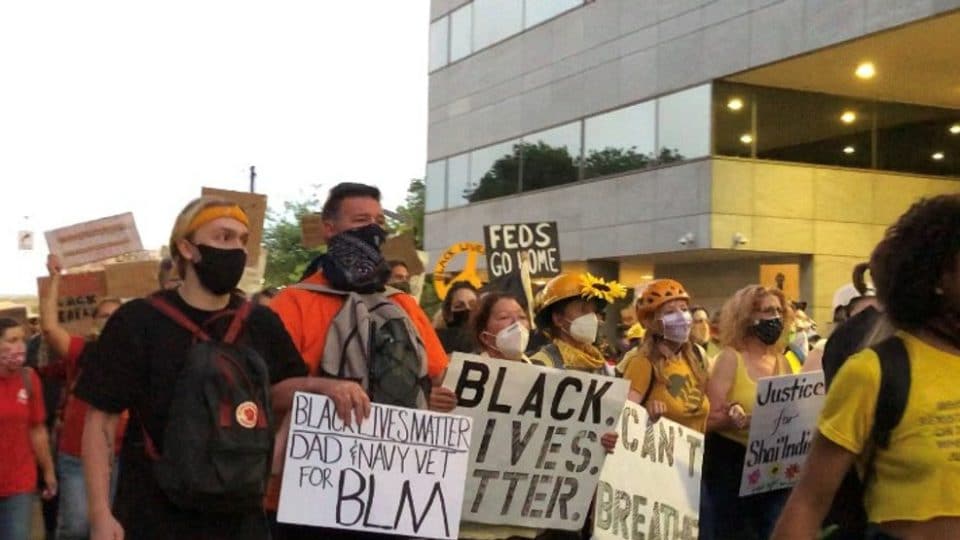 While the widespread protests starting after George Floyd’s death in police custody  seem to have subsided in many places., Portland, Ore. has been holding demonstrations every night since May 29. Peaceful protests were already happening for weeks before federal officers arrived on July 4.

Trump sent federal forces to the city this month,  and local officials have been concerned that they were exceeding their authority and violating protesters’ rights. The federal force tactics have  reinvigorated nightly demonstrations. This has resulted in protesters  spray-painting the walls of the U.S. District Court building, demanding that federal agents go home. Groups of mothers have banded together, locking arms and chanting: “Feds stay clear. Moms are here.”Early in the protests, protesters broke into the Multnomah County Justice Center and set some of the offices on fire, and the Portland police have reported cases of looting. More recently, demonstrators have thrown rocks and bottles at federal officers. But many have protested peacefully, and Gov. Kate Brown has called the presence of federal agents an “abuse of power.” President Trump has called the demonstrators “anarchists” who “hate” the country, and Chad F. Wolf, the acting secretary of homeland security, has blamed Oregon officials for the unrest. Video The officers came because of an executive order signed by President Trump in late June to protect federal property from destruction. Night after night, videos show these officers emerging from the two federal buildings as protesters draw near.

Videos show that although protesters were angry, officers often responded with disproportionate force. They struck protesters with batons  and used flash bangs, pepper balls and other less-lethal munitions to clear the streets. Their actions often appeared to escalate rather than de-escalate matters. And in some instances, they attacked when there was no apparent threat. On July 11, protester Donavan La Bella was at the federal courthouse when an officer appears to have fired at his head in retaliation for tossing a spent tear gas canister. La Bella’s mother told local media he suffered skull fractures and needed surgery. Later that night when field medics sought officers’ help for a wounded protester, they were aggressively cleared away.

On July 18, a Navy veteran was batoned and pepper-sprayed in another unprovoked attack. His right hand was broken, and he needs surgery. Sometimes members of the press were hit. In the middle of all this, protesters were detained in ways that alarmed civil rights advocates and former Homeland Security officials. “Can your people identify themselves as law enforcement?” On July 15, several federal officers were filmed driving in unmarked vehicles in the blocks around the courthouse.

What started out as a movement for police accountability  and racial justice has morphed into a complex mobilization. The protesters’ goals now include defunding the police, addressing income inequality and pushing federal agents out of the city.

Signs such as “White Silence=Violence” and “Black Lives Matter” are widespread, and calls at the demonstrations to address racial inequities persist. One woman held a sign that said: “My Black Child is Watching! #BLM She Will Know Her Life Matters.”

How the city responded

On June 8, after more than a week of large-scale demonstrations involving thousands of marchers, the chief of the Portland Police Bureau stepped down, saying new leadership was needed to rebuild public trust. Shortly after, a federal judge upheld restrictions on tear gas put in place by Mayor Ted Wheeler, barring the use of the chemical agent except when life or safety was at risk.

The City Council also passed a budget that would cut $15 million from the police in the upcoming fiscal year, a demand sought by protesters.

Oregon has a history of white supremacy. A law passed in 1844 said that any Black person would be “whipped twice a year until he or she shall quit the territory” and leaders also later banned Black people from entering the territory.Some protesters say the state’s deeply racist history is still reflected in Portland’s structures. One protester, Reginald Liggins, who is Black,  that he began commuting by bus after being pulled over multiple times by the Portland police without reason. Liza Lopetrone, a veterinary nurse who is white and joined the Wall of Moms protest this week, said she wanted to bring the state’s white supremacist legacy to light.

Others were not moved to participate until federal agents entered the city. Christopher J. David, a Navy veteran who was filmed being beaten with a baton by federal officers, had not followed the protests until U.S. agents were deployed. He came to the protests to ask officers about their use of violent tactics against protesters.