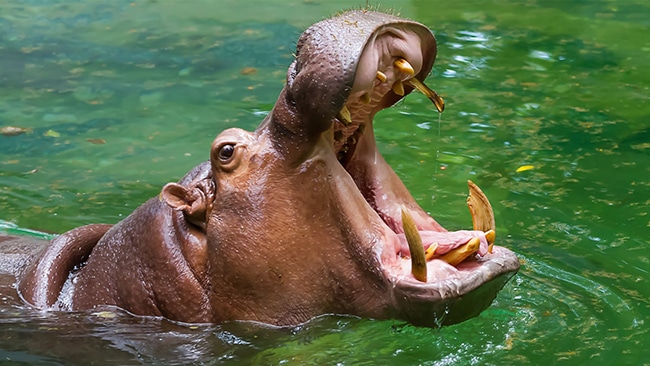 A hippopotamus attacked a 2-year-old boy in Uganda, swallowing half of his body before spitting him out, according to a statement from the Uganda Police Force said on Friday.

He was playing outside his home in Rwenjubu cell, Lake Katwe, but just over 800 yards from the lake, one of the smallest bodies of water in the Great Rift Valley, where hippos reside.

The child was attacked on December 4 at around 3 p.m. local time (7 a.m. ET) in the Katwe-Kabatoro district, in the southwest of the country, according to the statement.

The boy, named by Ugandan police as Iga Paul, had been playing at his home in Rwenjubu cell, Lake Katwe.

“It took the bravery of a one Chrispas Bagonza, who was nearby, to save the victim after he stoned the hippo and scared it, causing it to release the victim from its mouth,” a spokesperson for Uganda Police Force said in the statement.

The boy was taken to a nearby clinic for injuries on one hand and later transferred to Bwera Hospital, west Uganda, for further treatment, the statement added.

The child has now been discharged after making a full recovery, police said. He also received a vaccine for rabies, before being handed back to his parents by the police.

“Although the hippo was scared back into the lake, all residents near animal sanctuaries and habitats should know that wild animals are very dangerous,” the statement said.

Known as one of the most dangerous animals on the planet, hippos can snap a canoe in half with their strong jaws.