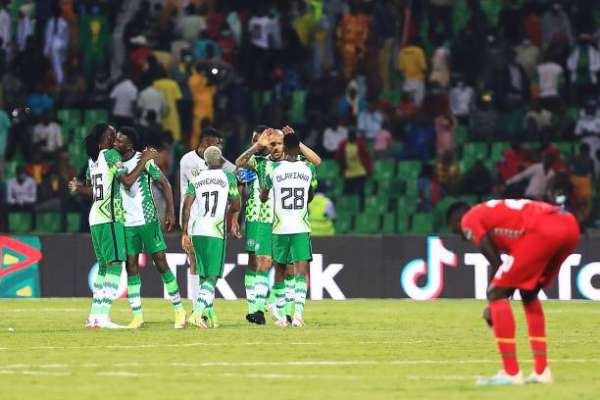 The Africa Cup of Nations round of 16 has been confirmed and will begin on Sunday, following a group stage which provided some shocks, some talking points and history.

The game taking place in Cameroon has started picking up after a slow start, with nine 1-0s and two goalless draws in the first round of group matches.

The two teams that have stood out so far are Cameroon, the host and Nigeria.

The Super Eagles are the only side with a 100% record, an unexpected fact as they dismissed long-serving boss Gernot Rohr just four weeks before the tournament.

Yet the side have gelled well under interim coach Augustine Eguavoen, dominating seven-time champions Egypt in their opening game and going on to beat Sudan and Guinea-Bissau comfortably.

Cameroon, meanwhile, enjoyed wins over Burkina Faso and Ethiopia to top Group A, with skipper Vincent Aboubakar netting five goals to equal a tournament scoring record for the Indomitable Lions.

The unexpected eliminations have included the surprise exit of defending champions Algeria.

They drew 0-0 with Sierra Leone in their opening match, then lost against Equatorial Guinea before being soundly beaten by Ivory Coast.

Four-time champions Ghana were also exited, finishing bottom of Group B after a stunning 3-2 defeat by debutants Comoros.

Senegal another favourite, finished top of Group B despite only managing to score one goal.

The Teranga Lions were without goalkeeper Edouard Mendy and captain Kalidou Koulibaly for their first two games because of Covid-19, and their performances is expected to improve.

Another side struggling to find the back of the net have been Egypt.

Mohamed Salah’s Pharaohs drew a blank as they lost to Nigeria and then could only beat Guinea-Bissau and Sudan 1-0.

Then Comoros; ranked 132nd in the world got  their first Afcon goals and win over 10-man Ghana, and got them to qualify for the last 16 as one of the best third-placed teams.

The Gambia, the other first-timers in Cameroon, qualified for the last 16 after winning their opening game against Mauritania, grabbing a late draw against Mali and also beating Tunisia.

Malawi also made the knockout stages with some enterprising football, being narrowly beaten by Guinea before beating Zimbabwe and securing a draw with Senegal.

The state of the pitch at Douala’s Japoma Stadium where the tournament is being played  has not been up to standard.

Though opened in 2020, the surface is said to be unplayable at times – prompting scrappy games, player errors and the Confederation of African Football (Caf) to consider moving matches away from the 50,000-seater stadium.

Normally Nations Cup matches where the host team are not playing are poorly attended, but crowds in Cameroon have been better than in previous tournaments.

Because of the coronavirus pandemic crowds have been capped at 80% of capacity for Cameroon games and 60% for all others.

But after low attendances for early games in Bafoussam, Douala and Limbe, Cameroon’s prime minister ordered schools and civil servants to finish early so that they could attend games.

For the delegations themselves, it has been nigh-on impossible to avoid Covid cases. Cape Verde, Malawi and Tunisia have been among the hardest hit – but all three managed to reach the last 16, and all games have gone ahead as scheduled.

Security was a major concern on the eve of the tournament because of the separatist demands of the south-west region of Cameroon, where the city of Limbe is hosting eight matches, but the tournament has been largely unaffected so far.

A small improvised explosive device went off before the tournament, while on the first day of games in Limbe two individuals were shot dead in nearby Beau in incidents believed to be unrelated to the Nations Cup.

Two Algerian journalists were subject to a knife attack in a mugging outside their hotel in Douala in the opening week, while teams have been more affected by breaches of security within their own camps.

Meanwhile, Gabon captain Pierre-Emerick Aubameyang – who has not played in Cameroon after testing positive for coronavirus – took to social media to deny widespread reports he had returned late to camp after a night out drinking.

The Arsenal striker returned to his club for further tests on what the Gabon FA described as “heart lesions” but he declared he was “completely healthy” on Thursday.

The Round of 16 fixtures will begin on Sunday.

Below are the Round of 16 fixtures: