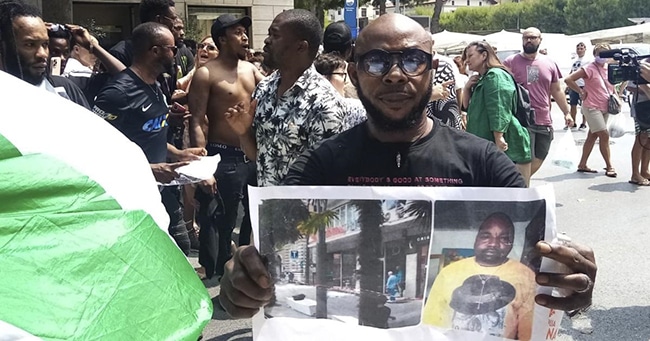 Wife of Nigerian, Alika Ogorchukwu killed after being  assaulted in Civitanova Marche city in the Province of Macerata, Marche region of Italy cries for justice.

The Nigerian Embassy in Rome said it is collaborating with relevant Italian authorities to ensure justice and provide succor to Ogorchukwu’s family.

Ogorchukwu’s death has caused a wave of protests across Italy.

The deceased, a 39-year-old physically challenged vendor, was attacked at his stall by suspect Filippo Claudio Giuseppe Ferlazzo, based on the camera footage on Friday.

The attacker grabbed the vendor’s crutch and struck him down. He wrestled the prone victim in broad daylight with several surveillance cameras recording.

The suspect has since been apprehended by the policeon suspicion of murder and theft of the victim’s phone.

The aggressor went after the victim, first hitting him with a crutch. He made him fall to the ground, then he finished, causing the death, striking repeatedly with his bare hands,” he said.

Daniel Amanza, head of the association for immigrants in the Marche region’s Macerata province (ACSIM) disclosed that Ogorchukwu was married with two children.

Amanza said Ogorchukwu resorted to selling goods on the street after he was struck by a car and lost his job as a labourer due to his injuries.

Ogorchukwu’s wife has said she is seeking justice following his “painful death”.

None of those who witnessed the broad daylight attack appeared to intervene.

“This is a form of wickedness I don’t know,” Ogorchukwu’s wife, Charity Oriachi, told the BBC’s Focus on Africa.

Ms Oriachi said she had received help in coming to terms with her husband’s death but was tired of “talk”. Now, she was only interested in justice, she insisted.

Her family had lived in Italy for a long time, she said, stressing that her husband had never sought any trouble.

The Nigerian government has asked Italian authorities to quickly “bring the perpetrator of the heinous act” to justice.

Meanwhile the suspect has been ordered to remain in jail as the investigation continues.

His defence lawyer told the media the suspect had said he was sorry and that there was “no racial element” involved.

A police investigator said Ogorchukwu was attacked after the trader’s “insistent” requests to the suspect and his partner for spare change.

The partner, identified as Elena D, told Italian newspaper Corriere della Sera that Ogorchukwu had touched her arm, but that did not bother her.

Ms Oriachi now wants to see the suspect “face to face”, to understand why he killed her husband, the family’s lawyer told the Associated Press.

Who is Salman Rushdie? Why is he wanted dead?