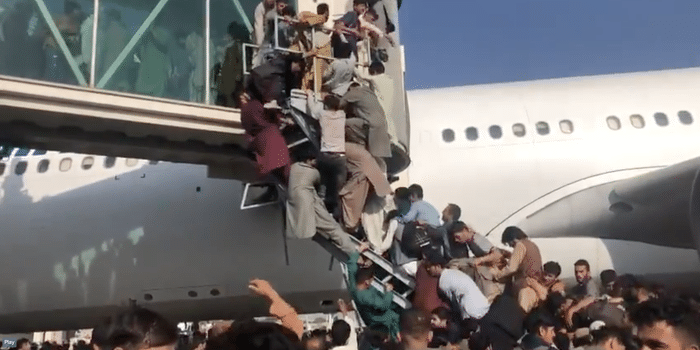 A new leadership has taken over Afghanistan after the country’s government collapsed and a military group called the Taliban took control of the capital city of Kabul.

The Taliban are a military group that have been fighting for power in the country.

The concern now is what the Taliban takeover would mean both for people in Afghanistan and in other parts of the world.

Who are the Taliban?

The Taliban is an extreme Islamic group, which ruled Afghanistan from 1996 to 2001.

They say they are followers of Islam, but their beliefs are much more extreme than those of the majority of Muslims.

They have been fighting to take back control of Afghanistan and want to enforce their own strict version of Sharia, or Islamic law.

When the Taliban leaders were in control, they banned many things, including education for girls, television, music and cinema.

Men were made to grow beards and women had to wear burkas, which is a one-piece veil that covers the face and body.

The Taliban’s strict laws and extreme punishments made them unpopular with other countries.

People living under Taliban control could be punished very harshly for breaking their rules. They have been accused of various human rights and cultural abuses.

How did the Taliban manage to take back control?

For the most of the last 20 years, the US have supported the government in Afghanistan that was put in place following the war there.

But US president Joe Biden announced in April 2021 that all American forces would leave the country by 11 September.

Over the past few months ago the Taliban had began gaining control of territories around the country but how quickly they have been able to take control of new areas has accelerated in recent days.

The capital Kabul was the last major city in Afghanistan to hold out against the Taliban, but it has now claimed victory there.

Fighters have seized the presidential palace and the President Ashraf Ghani has fled to Uzbekistan.

What led to the war in Afghanistan?

In September 2001, nearly 3,000 people were killed in the 9/11 terrorist attacks that happened in New York and Washington in America.

The United States believed that a group called al-Qaeda, and its leader Osama Bin Laden, were responsible for the attacks.

Bin Laden was thought to be hiding in Afghanistan, under the protection of the Taliban.

There was a lot of international pressure on the Afghan leaders to hand over Osama Bin Laden. When the Taliban didn’t do this, the United States decided they would use their armed forces.

The US militarily quickly removed the Taliban from power and promised to support democracy in the country. A new Afghan government was put in place.

The US was being supported by Nato (an international organisation which brings together the armies of various countries) and other countries that agreed with them, including the UK. They tried to help the new government build a stable nation.

The Taliban were no longer in control but regrouped in different parts of the country and neighbouring states. They continued their attacks against the international forces who remained in Afghanistan.

Many people believed that future peace in Afghanistan could only come if the government negotiated with the Taliban.

In early 2019, the US and the Taliban began peace talks aimed at finding a solution to the 17-year conflict in Afghanistan.

Eventually the US agreed to withdraw its troops and leave power to the new Afghan government.

What will happen now the Taliban is in charge again?

There are huge concerns for women especially, as there are already stories of women being attacked. The Taliban are reported to have already started forcing changes to how they dress and their choice to work, in some parts of the country.

Due to fear and uncertainty over what could happen under the Tabliban’s rule, thousands of residents and foreign nationals have been trying to escape Kabul.

There was panic in Kabul as the Taliban drew closer to victory with some Afghan people heading for the airport, abandoning cars and making their way on foot in a desperate bid to get out of the country.

But commercial flights have been suspended with priority reportedly being given to US military flights that are evacuating diplomatic staff.

More than 60 countries have issued a joint statement calling for security and civil order to be immediately restored, and asking the Taliban to allow those who wish to leave to do so

The US has deployed thousands of troops to help remove its staff and the Afghans who assisted with its mission.

Helicopters carrying embassy workers could be heard over the city on Sunday, and there were reports of smoke rising near the embassy as important documents were destroyed.

About 600 British troops have been deployed to help UK nationals to leave the country.

Some other countries are closing their embassies altogether, but Russia said it would not because it has been provided with security assurances by the Taliban.