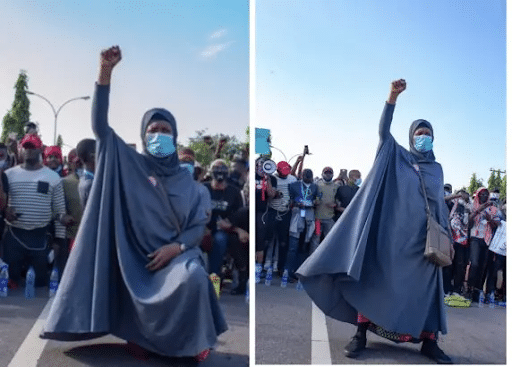 The #EndSars protests which has spread to almost all states in Nigeria came after weeks of outcry online from young people in the country over claims of harassment, rape, killings and extortion by the police unit Special Anti Robbery Squad (SARS). Demonstrations continued even after the inspector general of police announced Sunday that the unit was being disbanded and its officers redeployed

The Inspector-General Mohammed Adamu announced on Sunday 11th October 2020 that the group had been scrapped, and announced the setting up of a new outfit known as Special Weapons and Tactics Team (SWAT) yesterday, to take over from the dissolved Special Anti-Robbery Squad (SARS) unit of the Nigerian Police Force.

But protesters rejected the announcement, as many see the changes as not enough to reform the police. Protests continued in Lagos, Abuja and Kwara on Monday, with young Nigerians saying they would continue to take to the streets until the entire police force was reformed.

“This is just the beginning!! We won our fight to #ENDSARS .. now Reform the Nigerian police!! #Endpolice brutality! We deserve good governance! #Endpolicebrutality,” Wizkid tweeted Sunday.

Abayomi Akinbo, who participated in protests in the Nigerian capital Abuja, agreed. “It is not enough to end that unit and redeploy them to other places,” he told CNN. “What we want is for the unit to end, and an investigation into the conduct of the SARS unit to be conducted.”

Akinbo added that officers should be trained on how to engage with citizens to minimize the brutality they inflict on people.

Kanye West, Trey Songz, Rio Ferdinand and John Boyega are a few of the celebrities from all over the world have lent their voices to the protest using the hashtag #EndSARS.

Twitter’s CEO, Jack Dorsey, joined the campaign on Thursday against police brutality in Nigeria by calling  for donations via Bitcoin in support of the movement.

Feminist Coalition, one of the leading bodies in the  campaign against police brutality in Nigeria  announced on Wednesday that it has raised over N62 million in crowdfunding for the protest which is aimed at supporting protesters. The fundsare to be used in their continued supply of first aid, masks, bail, hospital bills, food, water, glucose for protesters and also for the provision of legal aid to protestors, who have been arrested on the frontline.

In President Muhammadu Buhari  address to Nigerians in a video on Monday, he said that the disbandment of SARS “is only the first step in our commitment to extensive police reform.”

He added that every police officer responsible for wrongful acts would be brought to justice.

The government on Thursday has also banned protests in the capital Abuja, citing public safety measures to tackle Covid-19. But protester in Abuja plan to go on with their peaceful protest to make their lawful demands as citizens.