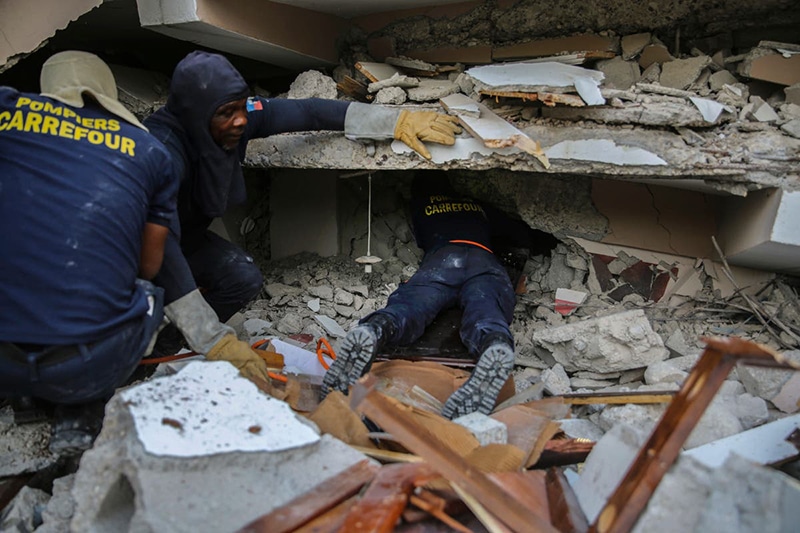 Prime Minister of Haiti, Ariel Henry says his country is “on its knees” after the latest devastating earthquake where more than 2,000 people were killed last Saturday.

More than 12,000 people were injured and lots missing after the 7.2-magnitude quake.

There were further tremors late on Wednesday causing many to rush from their places of shelter into the streets.

Haitian officials estimate there are 600,000 people in need of emergency assistance. The delivery of aid has been further hampered by heavy rains brought this week by Tropical Storm Grace.

The UN Children’s Fund (Unicef) says about 500,000 children have limited or no access to shelter, safe water and food.

Unicef also warned that many schools had been destroyed three weeks before they were due to reopen. Children have been out of school for months at a time because of the Covid pandemic combined with security challenges.

“It is so crucial for children who have just gone through this traumatic earthquake-plus-extreme weather experience, to have the normalcy and stability of being in a classroom with their friends and teachers,” Unicef Haiti representative Bruno Maes said.

Much needed aid have not arrived

Aid agencies and rescue workers are also having to contend with armed gangs who have attacked convoys travelling to the worst-hit areas.

But the UN Office for the Coordination of Humanitarian Affairs said on Tuesday that following negotiations, the gangs had agreed to let aid through.

In the city of Les Cayes, one of the areas worst affected by the quake, many survivors are sleeping in make-shift tents on the city’s football field.The earthquake adds to the many problems already faced by Haiti; including a political crisis following the assassination of the former president just  last month.

Haiti has been hit by a series of natural disasters in the past, including Hurricane Matthew in 2016.

The deadliest was the 2010 earthquake which killed more than 200,000 people and caused extensive damage to the country’s infrastructure and economy.