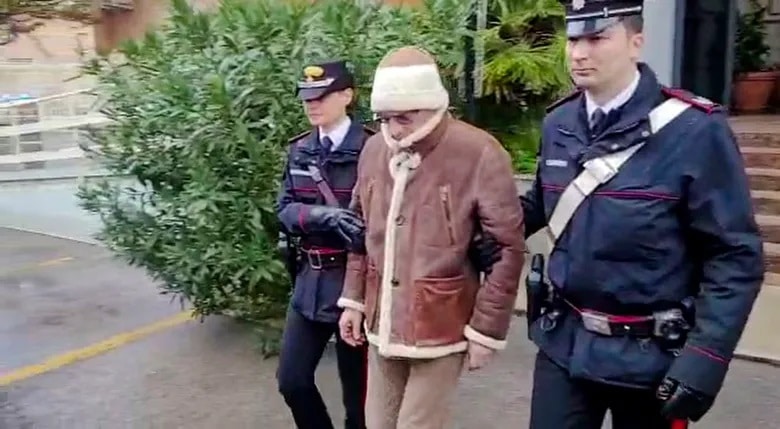 The Sicilian mafioso, Matteo Messina Denaro 60, was finally detained by armed police at a private hospital in Sicily on Monday, where he was being treated for cancer.

Nicknamed “Diabolik” and “‘U Siccu” (The Skinny One), Messina Denaro has been on the run since 1993 and was sentenced in absentia to a life term for his role in the 1992 murders of anti-mafia prosecutors Giovanni Falcone and Paolo Borsellino, crimes that shocked the nation and sparked a crackdown on Cosa Nostra.

He was driven away in a black minivan from Palermo’s “La Maddalena” hospital, wearing a brown fur-lined jacket, glasses and a brown and white woolly hat.

Judicial sources said he was being treated for cancer and had an operation last year, followed by a series of appointments under a false name.

Magistrate Paolo Guido, who was also in charge of investigations into Messina Denaro, said dismantling his network of protectors was key in reaching the result following years of work.

Another man arrested on the scene had driven Messina Denaro to the hospital, he was arrested on suspicion of aiding a fugitive.

Italian Prime Minister Giorgia Meloni was in Sicily to congratulate police chiefs after the arrest.

“We have not won the war, we have not defeated the mafia but this battle was a key battle to win, and it is a heavy blow to organized crime,” she said.

Maria Falcone, sister of the murdered judge, echoed that sentiment.

It proves that mafiosi, despite their delusions of omnipotence, are ultimately doomed to defeat in the conflict with the democratic state,” she said.

Messina Denaro was born in the town of Castelvetrano near Trapani in western Sicily, the son of a mafia boss.

Just last September, police say that he was still able to issue commands relating to the way the mafia was run in the area around Trapani, his regional stronghold.

He was well known for his expensive taste in cars, finely tailored suits and Rolex watches before his disappearance.

He faces a life sentence for his role in bomb attacks in Florence, Rome and Milan that killed 10 people in 1993 and is accused by prosecutors of being solely or jointly responsible for numerous other murders in the 1990s.

He was also involved in the 1993 kidnapping of a 12-year-old boy, Giuseppe Di Matteo, to deter his father from giving evidence against the mafia, prosecutors say. The boy was strangled and his body dissolved in acid after 2 years in captivity.

The arrest comes almost 30 years to the day since police arrested Salvatore “Toto” Riina, the Sicilian Mafia’s most powerful boss of the 20th century. He eventually died in jail in 2017, having never broken his code of silence.

Despite the excitement from the arrest, Italy still has a lot of work to do in their struggle to deal with organized crime groups whose network stretch far and wide and is deeply rooted in the culture.

Experts say that Cosa Nostra has been usurped by the ‘Ndrangheta, the Calabrian mafia, as the most powerful organized crime group in Italy.