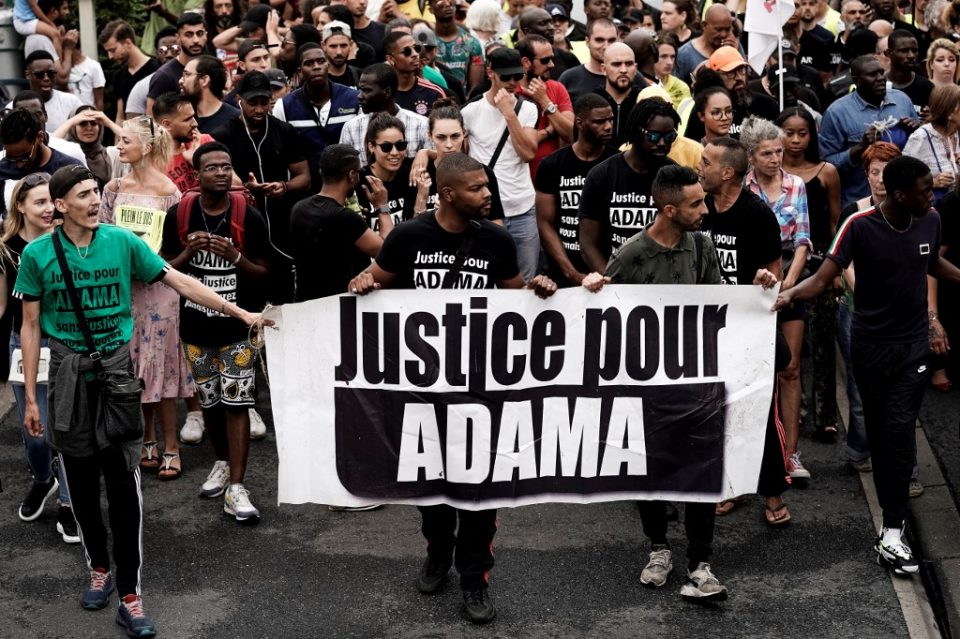 On July 2016 AdamaTraoré, 24 was stopped by police when out with his brother in the Paris suburb of Beaumont-sur-Oise.

He did not have his identity card on him, and ran as the police approached. Three Gendarmerie officers chased him down and detained him and he died shortly after in their custody.

One later told investigators he and his two colleagues had pinned down Mr Traoré using their bodyweight.

Violent protests swept Paris for several days after his death in 2016.

His case has led the case against police brutality in France, which young ethnic minority communities say targets them.

According to official reports, he died of heart failure, possibly due to an underlying health condition. Last Thursday, the officers who detained Mr Traoré were exonerated by a police investigation.

But another autopsy, requested by Traoré’s family, reportedly suggests it was the police’s actions that caused his death.

The independent report says he died of “positional asphyxia” caused by being placed in the prone position.

On Tuesday about 20,000 protesters went on with their rally after their request for permission to protest was denied by police. Some of the demonstrators carried Black Lives Matter and ‘I can’t breathe’ placards.

Public gatherings are limited to 10 people to control the spread of coronavirus.

The death of Adama Traoré, 24, has been likened to the killing of George Floyd in the US, whose death has sparked protests across the country.

Police clashed with protesters in the Paris suburbs on Tuesday.

The Paris police chief has rejected charges of racism against his force.

There were also demonstrations in other cities, with thousands attending rallies in Marseille, Lyon and Lille.

Interior minister Christophe Castaner criticised the protests in a tweet. “Violence has no place in a democracy,” he wrote, and he congratulated the police “for their control and composure”.

Police union official Yves Lefebvre insisted the two cases were very different but he warned that France’s inner-city banlieues (suburbs) were like a pressure-cooker, “ready to explode”.

“Today we are not just talking about the fight of the Traoré family. It is the fight for everyone. When we fight for George Floyd, we fight for Adama Traoré,” his sister, Assa, told the protest, according to AFP.

In a letter to police officers, he said he sympathised with the “pain” they must feel “faced with accusations of violence and racism, repeated endlessly by social networks and certain activist groups”.