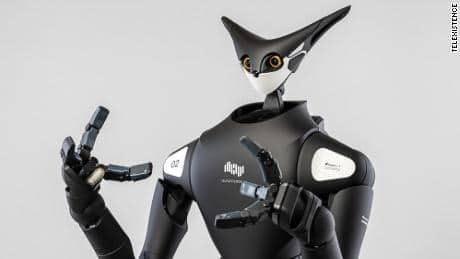 Almost a third of Japanese are aged 65 and above so finding workers is challenging.

So companies are turning to technology as a solution — including two of the biggest convenience store franchises in Japan, FamilyMart and Lawson.

This week, Lawson deployed its first robot in a convenience store, in Tokyo. FamilyMart trialled the same robots last month, and says it plans to have them working in 20 of its stores by 2022.

Both chains are deploying a robot named Model-T, developed by Japanese startup Telexistence. Seven feet tall when extended to its full height, the robot moves around on a wheeled platform and is kitted out with cameras, microphones and sensors. Using the three “fingers” on each of its two hands it can stock shelves with products such as bottled drinks, cans and rice bowls.

“It is able to grasp, or pick and place, objects of several different shapes and sizes into different locations,” Matt Komatsu, head of business development and operations at Telexistence, tells CNN Business.

This sets it apart from other robots used in stores, such as those used by Walmart to scan shelf inventory, or the ones used in warehouses to stack boxes. Warehouse robots “pick up the same thing from the same place and place it on the same platform — their movement is very limited compared to ours,” says Komatsu.

It is remotely controlled

The Model-T robot — named after the Ford automobile that pioneered assembly line production in the early 20th Century — is controlled by shop staff remotely. A human “pilot” wears a virtual reality (VR) headset and special gloves that let them “feel” in their own hands the products the robot is holding. Microphones and headphones allow them to communicate with people in the store.

elexistence does not plan to sell the robots and VR systems directly to stores, but will provide them for a fee. It would not disclose the price but said it would be cost-competitive with human labor.

Stores would also be able to operate with fewer workers. “A remote-controlled robot allows one person to work at multiple stores,” says Satoru Yoshizawa, a representative of FamilyMart.

Yoshizawa says that many of the company’s stores find it especially difficult to hire people for short periods of three to five hours a day for shelf stacking. With a robot, they could employ a single operator to work across multiple stores, and focus on hiring humans to work at cash registers, he says.

Lawson faces the same problem. “We have been trying to solve the labor shortage in some of our stores and through this experiment we are going to examine how the robots will help,” Ken Mochimaru, of Lawson’s corporate communications division, tells CNN Business.

If it proves effective, he says that Lawson will consider rolling out the robots across more of its branches.

Compared to other countries, Japan’s labor shortage means there’s less concern that the deployment of robots will result in human job losses. Prior to Covid-19, according to a 2020 report by management consulting firm McKinsey, Japan was on track to automate 27% of existing work tasks by 2030. Although that could replace the jobs of some 16 million people, the report said, it would still leave the country short of 1.5 million workers.

Immigration could also help to fill the shortfall. The government has made some moves to open up Japan to foreign workers, but experts argue that Japan lags behind other industrialized countries in extolling the benefits of immigrants to its population.

Embracing “labor-saving technology” is part of the solution, says Hong, but she adds that there are still hurdles to overcome before the widespread adoption of robots in daily life. Japan will need to work out a “legal framework for the use of such technologies alongside the general population,” she says, including consumer protection and data protection.

She adds that there needs to be “strong and effective social nets” in place to minimize negative impacts on unskilled workers.

However, the Model-T robot still has a way to go before it operates to the same standard as a human worker. It takes the robot eight seconds to put one item on a shelf, whereas it takes around five seconds for a human to do the same. So far, the bot can only handle packaged products, not loose bakery items or fruits and vegetables.

Telexistence, which launched in 2017, is working to improve these limitations. Using AI, the company hopes to teach the robot to copy human movements automatically, so that it can operate without a pilot.