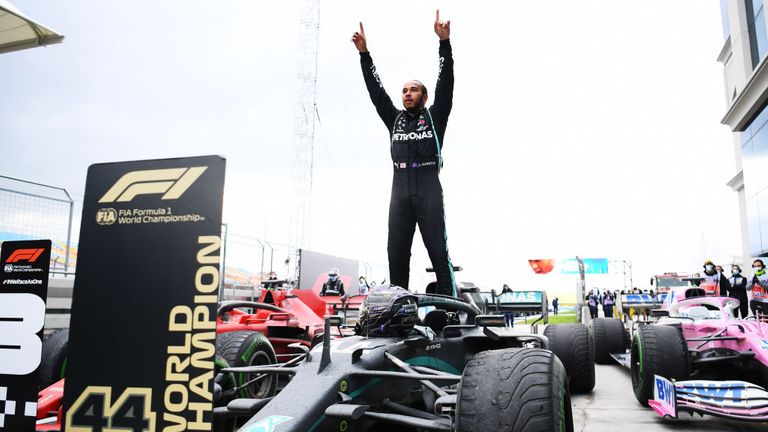 Lewis Hamilton’s  victory at the Turkish Grand Prix on Sunday sealed the championship and his seventh title. He proved once again to be one of the greatest champions of Formula One.

With this title, he finaly matched Michael Schumacher’s record

Head in his hands and in tears as he sat in his car after the race, even the world champion for whom winning has become commonplace seemed to struggle to take in this moment. Shortly after he climbed from the cockpit he was speaking through the tears that he could still not quite contain when he stood on top of the podium. Hamilton admitted he found it hard to comprehend just how far the boy who had grown up on a council estate in Stevenage had come. “I am almost lost for words,” he said. “We dreamed of this when I was young. It is so important for kids to see this, and don’t listen to anyone who says you can’t achieve something. Dream the impossible. You have got to chase it and never give up.” Now 35, Hamilton has been chasing his dreams in F1 for 14 seasons.

Matching his hero Ayrton Senna by winning a single championship had been his early hope, but having done so with his title in 2008, he surpassed Senna’s three, then Juan Manuel Fangio’s five and now stands alongside Schumacher as the champion of champions.

Schumacher’s records were thought to be untouchable but Hamilton has not only matched one and beaten others, he is also in a great position to set new benchmarks way beyond the German’s tallies. He has already surpassed the German’s records of race wins and pole positions with 94 and 97 respectively.

This season he has been indomitable with 10 wins and nine poles from 14 races. No driver has come close to even putting him under pressure, including his teammate Valtteri Bottas, who is in identical Mercedes machinery. Hamilton has closed the drivers’ championship out with three races in hand.

Hamilton only had to beat Bottas in Turkey to ensure he took the title but the world champion still did it decisively. Mercedes knew this was going to be a difficult race, having been off the pace all weekend, unable to bring their tyres into the correct operating window in the low temperatures and with the track – resurfaced two weeks ago – offering very little grip.

With rain from the off and Hamilton starting in sixth and Bottas ninth, a conservative cruise to ensure the title might have been expected. The champion was having none of it. He burst off the line into third with a statement of intent and as cars slithered hither and thither on the treacherous surface Hamilton kept his sure touch. At one point, behind Sebastian Vettel’s Ferrari and unable to pass, he tempered his desire to press on, held his place as he sought an opportunity and crucially kept his car on the line.

His moment duly came as it has done on many previous occasions, with his fine judgment and touch on his tyres making all the difference. As the leaders pitted for the second time Hamilton insisted he could stay out as the track began to dry and his rubber wore down. It proved inspired. He passed Racing Point’s Sergio Pérez, who finished second, for the lead and hared off into the distance. The Mercedes team principal, Toto Wolff, could not contain his admiration, describing his driver as “hungry as a lion”.

The worn intermediate rubber might have been a danger but he had judged it to perfection; as the tyres wore their grooves down to slicks so the track had dried out and they proved perfectly suited to it. Even at the last, with an enormous gap, Hamilton controlled every aspect of his performance.

The team wanted him to make a late stop for fresh tyres to guard against any further rain but Hamilton, thinking back to 2007 in China when his title efforts were derailed by a pit-stop, insisted on staying out.

This was the world champion at the very top of his game. There was great pace, his exemplary touch as other cars spun off, as well as a fine tactician’s grasp of the bigger picture.

By the chequered flag Hamilton was over 30 seconds clear of Pérez, as great a victory as his performance in the wet at Silverstone in 2008. Twelve years on the talent is still clear, now honed by a master who gave notice that having gone beyond his wildest dreams more was likely to come.

“I remember watching Michael win those world championships. To get one or two or even three is so hard,” he said. “Seven is unimaginable. There is no end to what we can do together, me and this team.”

Bottas, who spun on the opening lap and could not recover, struggled throughout to keep his car on track. He ended up being lapped by Hamilton and finished in 14th.

Behind Pérez, Vettel was third for Ferrari with his teammate Charles Leclerc in fourth, a mighty return after a woeful season for the Scuderia. McLaren’s Carlos Sainz finished fifth.

Max Verstappen was in sixth and his Red Bull teammate Alexander Albon in seventh. McLaren’s Lando Norris was in eighth while Lance Stroll finished ninth for Racing Point having started from pole – he went backwards down the field after failing to work his second set of tyres. Renault’s Daniel Ricciardo rounded out the top 10.