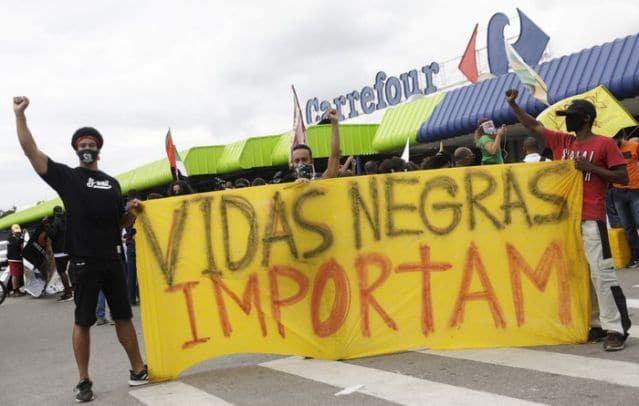 A Black man’s death after being attacked by two security guards at a supermarket in southern Brazil has sparked an uproar in Brazil, which is still struggling to cast off its centuries-old practice of injustice and violence toward people of color.

The incident was captured on cellphone video and posted to social media where it’s gone viral in South America’s most populous nation, has drawn comparisons in Brazil to the death of George Floyd, who was killed by police in Minneapolis on Memorial Day.

The man, identified as 40-year-old João Alberto Silveira Freitas, was killed Thursday in the city of Porto Alegre, the capital of Rio Grande do Sul state on Brazil’s southern border with Uruguay.

To make matters worse, Freitas’ death happened on the eve of that nation’s observance of Black Consciousness Day.

It  also comes in the wake of the unsolved murder of a prominent Black politician and activist, and numerous killings of young Brazilians of color in favelas by police.

On social media, video clips of the encounter show Freitas being lifted from his feet and dropped to the ground, before repeatedly being struck in the head. One of the security guards appears to hold Freitas’ arms down, while the other pummels him at least a dozen times during a 10-second video.

Fretas is screaming as a store employee standing nearby recorded the beating on a cellphone.

One of the guards captured in the video was a temporary military police officer who was off-duty, according to The Associated Press.

The incident took place after a confrontation between Freitas and an employee at the supermarket, who then called security, the AP notes, citing the local news outlet G1.

Carrefour, the giant French multinational corporation which owns the store, released a statement lamenting Freitas’ “brutal death,” adding that it will “adopt the appropriate measures to hold the people responsible for this criminal act.”

Eduardo Leite, the Governor of Rio Grande do Sol, tweeted that Friday should have been a day to celebrate progress in the push for racial equality, but instead was marked by violence and the loss of life of a Black citizen.

He vowed on Friday that the incident will be investigated. He said both security guards have been detained.

For his part, Brazil’s Vice President Hamilton Mourão said on Friday that Freitas’ death was “lamentable,” but insisted, “no Brasil não existe racismo” according to G1, which translates as “racism does not exist in Brazil.”