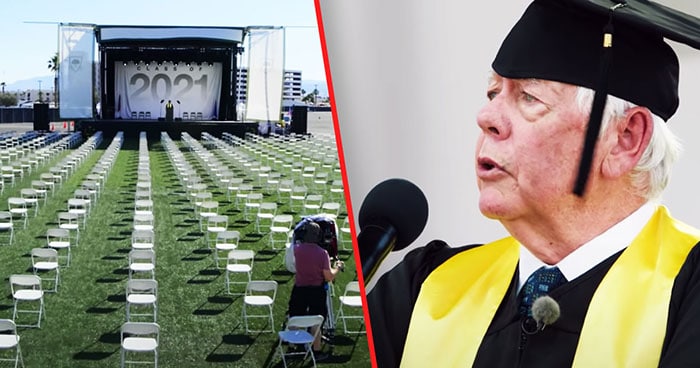 They are parents  of a student who died during the Parkland school shooting and have tricked a former president of the National Rifle Association (NRA) to give a speech in front of thousands of empty chairs representing victims of school gun violence.

The video posted online shows David Keene addressing a makeshift field in Las Vegas. Keene thought he was practicing his speech to the graduates of James Madison Academy, but in reality he was speaking to 3,044 empty chairs representing students who would have graduated high school this year had they not been killed, according to the parents, Patricia and Manuel Oliver.

“This year you focused on one of the most important of [James] Madison’s amendments, the Second Amendment,” Keene said to the rows of empty chairs. “There are some who will continue to fight to gut the Second Amendment, but I’d be willing to bet that many of you will be among those who stand up and prevent them from succeeding.”

“An overwhelming majority of you will go on to college, while others may decide their dream dictates a different route to success,” he added. “So my advice to you is simple enough: follow your dream and make it a reality.”

Patricia and Manuel Oliver, co-founders of the gun safety organization Change the Ref, organized the fake graduation. Their son Joaquin Oliver was killed in a shooting at Marjory Stoneman Douglas High School in Parkland, Florida, in 2018.

They included the speech in a three-part video series titled “Lost Class,” which also featured footage of the empty chairs, audio of 911 calls made by students, and the sound of guns being fired.

Lot spoke with CNN saying he did not want his commencement speech to be political or about gun control, but was asked to do so by the event organizers. He also accused Change the Ref of editing his speech.

“They should make the entire video public so that people can see how they deceptively edited my talk, taking not even a minute of a 15 minute talk,” he told CNN.

“I have dedicated years of my life to try to prevent school shootings.” Lott said. He told CNN he talked about “how to fix the system” and “how to make it work,” and how gun control advocates are fighting against his ideas, but he said the organization edited it out.

Lott, who drove 1,000 miles from Montana to Las Vegas, to give the speech has demanded that Change the Ref releases the full video.

Manuel Oliver told CNN that “there was no editing.”

“They said the speech. Those are their words. They believe that,” he said.

“This is what these guys believe and what we did was call it out and put it out there so everyone knows,” he added.

Manuel Oliver said the stunt was less about them and more about the students who were killed and therefore will not graduate this year.

“They might be mad. They might feel like fools,” he said. “Honestly, it’s not about them. It’s about the 3,044 chairs that were missing a student because of gun violence, and those two guys are part of the problem and they are far away from being part of the solution.”