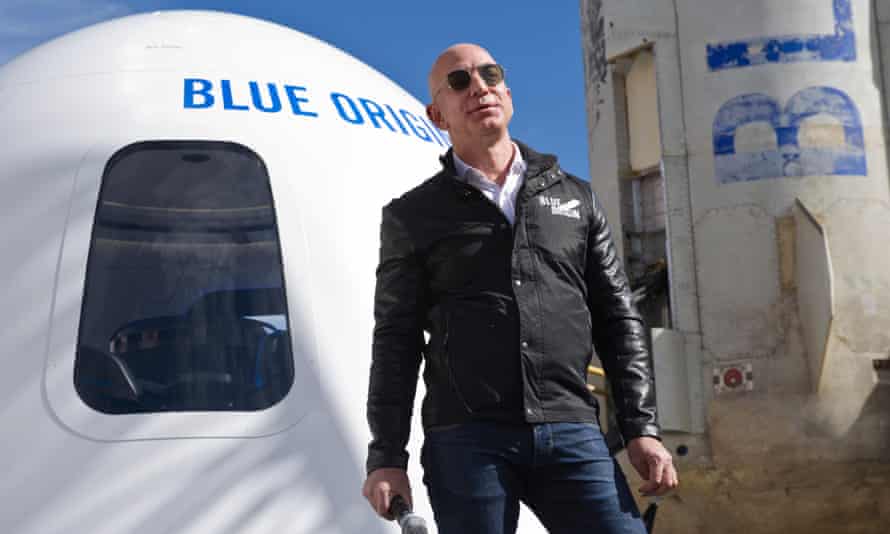 Jeff Bezos plans to shoot into space on July 20 to fulfill a lifelong dream of space travel. With a sublime view of Earth outside the windows, Bezos will float around the cabin of his company’s New Shepard spaceship for just three minutes before he has to strap into his seat again and fall back to the ground.

Blue Origin, the rocket company that Bezos founded in 2000, plans to use this launch system to carry tourists up to the edge of space. Passengers will get a few minutes of stunning views out of the largest windows of any spaceship in the world.

This is the first launch system designed for that purpose, and Bezos will be among first few people to fly on it, alongside his brother Mark and the highest bidder for the third seat. A flight like none other before.

“Ever since I was five years old, I’ve dreamed of traveling to space,” Bezos said in a Monday Instagram post announcing his plans to rocket into space.

“I want to go on this flight because it’s a thing I wanted to do all my life. It’s an adventure – it’s a big deal for me,” he added in an accompanying video.

In this dream-realizing flight of Bezos’s, there will be no pilot, since the process is automated – and perhaps not even spacesuits either. Here’s what to expect.

On launch day, Bezos, his brother, and a to-be-determined multimillionaire will climb into the round, spacious cabin of the New Shepard and strap in. Then the rocket is expected to fire its engines, spewing flame and smoke across the plains of West Texas, in order to heave itself off the launchpad and into the skies.

As New Shepard screams through the atmosphere, the force of its climb and the pull of Earth’s gravity will pin the Bezos brothers and their guest into their reclining seats.

After just three minutes, they will suddenly feel weightless. They’ll have another three minutes to unbuckle and float around the cabin, drifting from one window to another. Those windows, which make up one-third of the capsule’s surface, will show the passengers the curve of Earth on one side of the spaceship and the blackness of space on the other.

“When we look down at the Earth from space, we see this amazing, indescribably beautiful planet. It looks like a living, breathing organism. But it also, at the same time, looks extremely fragile,” Ron Garan, an astronaut who spent 177 days in space, explained in a 2013 documentary film titled “Overview.”

He added: “Anybody else who’s ever gone to space says the same thing because it really is striking and it’s really sobering to see this paper-thin layer and to realize that that little paper-thin layer is all that protects every living thing on Earth from death, basically.”

Briefly, for just a minute or two, the New Shepard spaceship should clear the Krmn line – an imaginary boundary 62 miles (100 kilometers) above sea level, where space begins.

Then as gravity takes hold again and the spaceship begins to fall back to Earth, Bezos and his co-passengers will strap in for a high-speed plunge through the atmosphere. Then the capsule should deploy three parachutes – likely giving the passengers a significant jerk as the chutes balloon into the air to brake the spaceship’s fall.

After that, the parachutes should carry the capsule to a gentle landing in the Texas desert, where a recovery crew will be waiting to retrieve the Bezoses and their companion.

Meanwhile, the rocket booster will fall back to Earth separately, fire its engines to slow itself to about 5 mph, and self-land on a concrete pad, to be restored and fly again another day.

The whole journey will last about 11 minutes. That’s because New Shepard is a suborbital rocket. It’s too small, and its engines don’t have enough thrust, to push itself into orbit. So any tourists riding it, including Bezos, will just get to peek above the edge of space.

Another rocket company, Virgin Galactic, has flown people on similar suborbital flights before. But their missions require pilots to land their plane-like vehicle. For New Shepard, the entire flight is automated, so there will be no pilots or professional astronauts on board.

Blue Origin hasn’t specified whether Bezos or his companions will wear a pressurized spacesuit and helmet during their flight. But the company’s website indicates that New Shepard passengers will wear only a jumpsuit.

NASA astronauts and their international counterparts all wear pressurized spacesuits when they launch or land. NASA started requiring this after the Challenger disaster in 1986, when the Space Shuttle broke apart during launch, killing all seven crew members.

Spacesuits probably would not have saved the people aboard Challenger, but they could save lives if a space capsule happens to experience a cabin leak yet remain intact.

Blue Origin did not respond to multiple requests for comment on the upcoming flight. The New Shepard has flown successfully 15 times and has twice tested an emergency-escape system that should jettison the capsule and its passengers away from a failing rocket.