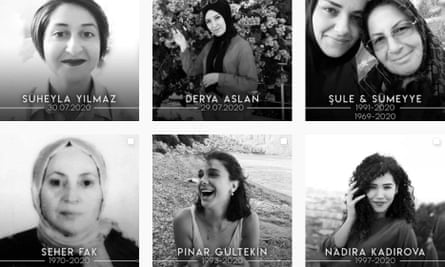 Women in Turkey are pointing out that the original context of Instagram’s #challengeaccepted trend, which was supposed to draw attention to ever growing rate of gender-based violence should not be forgotten.

The so called “honour” killings – Femicide, violence against women is a huge issue in Turkey. Last week, the country was rocked by the brutal killing of Pınar Gültekin, a 27-year-old student, who was allegedly killed by an ex-boyfriend.

Campaigners are also deeply worried about fresh efforts by President Recep Tayyip Erdoğan’s ruling party to repeal a Council of Europe treaty known as the Istanbul convention, that protects victims of domestic and gender-based violence and effectively prosecutes

Marches in four Turkish cities last week mourning Gültekin’s death and calling on Turkish politicians to uphold the Istanbul convention were accompanied by hundreds of thousands of social media posts: one initiative involved posting photos on Instagram in black and white to show how pictures of murdered women end up in black and white in the pages of newspapers.

The black and white challenge is said to have began in 2016 to raise awareness of cancer, but the repurposed idea along with appeals for women to tag others who inspire or support them and hashtags such as #challengeaccepted and #İstanbulSözleşmesiYaşatır, or “Enforce the Istanbul Convention”, quickly took off in Turkey.

As the hashtags were translated and shared in other languages and western celebrities such as Jennifer Aniston, Eva Longoria and even Ivanka Trump picked up on the trend, the original context appears to have been lost on most users, becoming a directionless display of female solidarity.

This latest round of  #challengeaccepted movement did was started by Turkish women to draw ttention to the going on in the fight against dometic violence in Turkey. “Every day, after the death of one of our sisters, we share black and white photographs and keep their memory alive,” said Fidan Ataselim, the general secretary of the campaign group We Will Stop Femicide.

“The Istanbul convention keeps Turkish women alive. We call on women from all over the world to spread this message and stand side by side with us against inequality.”

Gültekin is one of 120 women who have been killed in Turkey so far this year, mostly by partners and relatives. A total of 474 women were killed in 2019, the highest rate in a decade in which the numbers have increased year on year. The figures for 2020, affected by coronavirus lockdowns, are expected to be even higher.

Despite the fact Turkey has the highest femicide rate among 34 OECD countries, conservative elements in Turkey’s political sphere have repeatedly petitioned for the country to withdraw from the Istanbul convention on the grounds that it encourages divorce and ‘immoral lifestyles’.

On Tuesday, Meral Akşener, the leader of the opposition İYİ Parti (Good party) called on Erdoğan to uphold the legislation, saying that the government’s failure to properly implement the law since it was ratified in 2014 was contributing to the rising levels of gender-based violence.