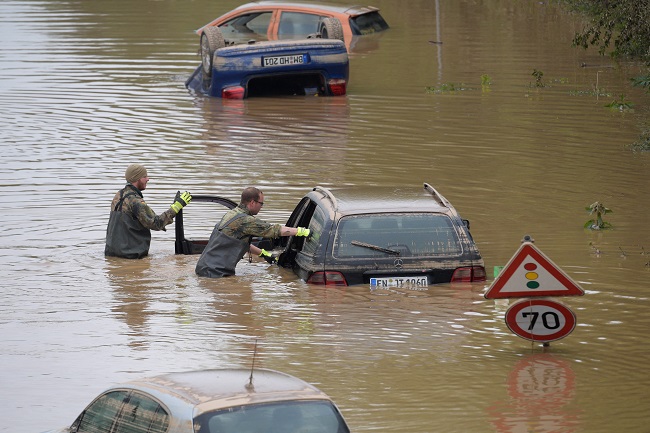 Waters are slowly lessening after overwhelming floods in Germany and Belgium, a huge clean-up is underway.

Over 180 people have died and that figure could rise with many still missing.

The brunt of the extreme weather in Europe has been on Germany, with at least 155 people killed in Rhineland-Palatinate state and neighbouring North Rhine-Westphalia.

The storms destroyed roads and bridges and reduced houses to rubble and mud.

Heavy rain and flooding continued on Saturday in other parts of Europe, but in Germany the waters receded to leave businesses and livelihoods destroyed.

The village of Wassenberg flooded when the nearby dam overflowed, leaving many inhabitants in shock.

“What can we do? Everything is broken,” said one man summing up the situation.

On the outskirts of Erftstadt in North Rhine-Westphalia, highway 265 looked more like a river than a road on Saturday.

The German armed forces were busy recovering vehicles trapped by the floodwaters.

Military units also arrived in other towns and villages to help with the clean-up efforts.

The number of missing people continues to fall as they are located, but the death toll is expected to rise as rescue operations continue.

German Chancellor Angela Merkel was expected to visit the region on Sunday.

Her visit comes after Germany’s president Frank-Walter Steinmeier went to the area on Saturday and made clear that it will need long-term support.

“A lot of people have lost everything they spent their lives building up — their possessions, their home, the roof over their heads,” Steinmeier said.

“It may only be possible to clear up in weeks how much damage needs to be compensated,” he said.

“My heart sank when I met people who lost their homes and the savings of a lifetime. I told them: Europe is with you. We share your grief. We will help you rebuild,” von der Leyen tweeted.

Political implications as German election is near

As Germany is headed to a general election in September, the disaster has taken a political turn.

Candidates were vying to make the most ambitious proposals to tackle climate change, which many experts have blamed for the floods.